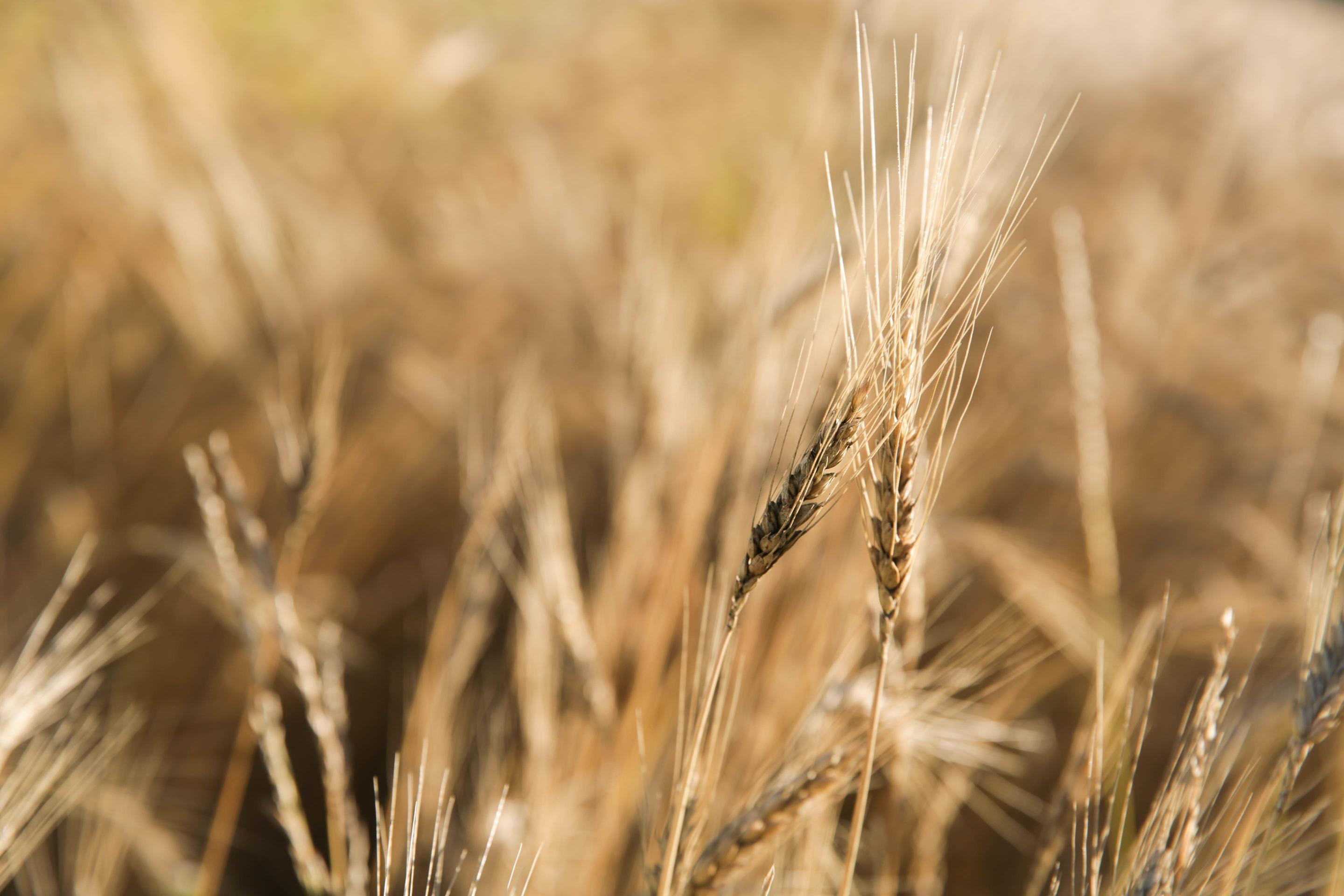 Grain to Oven: The Story Behind Our Turkey Red Wheat Bread

Standing in our Turkey Red Wheat field, located near Waynesville, Ohio, you’re surrounded by glimpses of the past, present, and future no matter which direction you look. The wild, golden heads of this bearded wheat dance gently with the wind like a balloon batting in the sky. It’s a hard winter wheat that isn’t typically grown on Ohio soil, but here it is robust and beautiful. Just one taste of the Turkey Red Wheat Bread that we’ve baked from this wheat, and it’s clear that you’re biting into a slice of history and so much more. It’s food with a story, and this one is quite delicious, touching on history, perseverance, and a shared passion of local partners and friends.

The germ of an idea for this wheat field was actually set into motion many years ago. It was at a farmers’ market in 1992 when Edward Hill, of Hill Family Farm, and Dale Friesen first crossed paths. Ed, who studied and grew ancient grains, had long been fascinated by the history of Turkey Red Wheat and he grew test plots of it. In the late 1800s, many German Mennonites living in Russia at the time left the country for the United States and Canada as a result of changes happening at the time. Stories have it that they had their children pluck the best Turkey Red Wheat seeds from the farmlands prior to their families fleeing to the United States and Canada. They brought with them these prized seeds that would flourish across The Breadbasket, where many settled in the U.S. “They must have prized their wheat so much,” says Ed. “They brought their language, their skills, and they brought their wheat.” 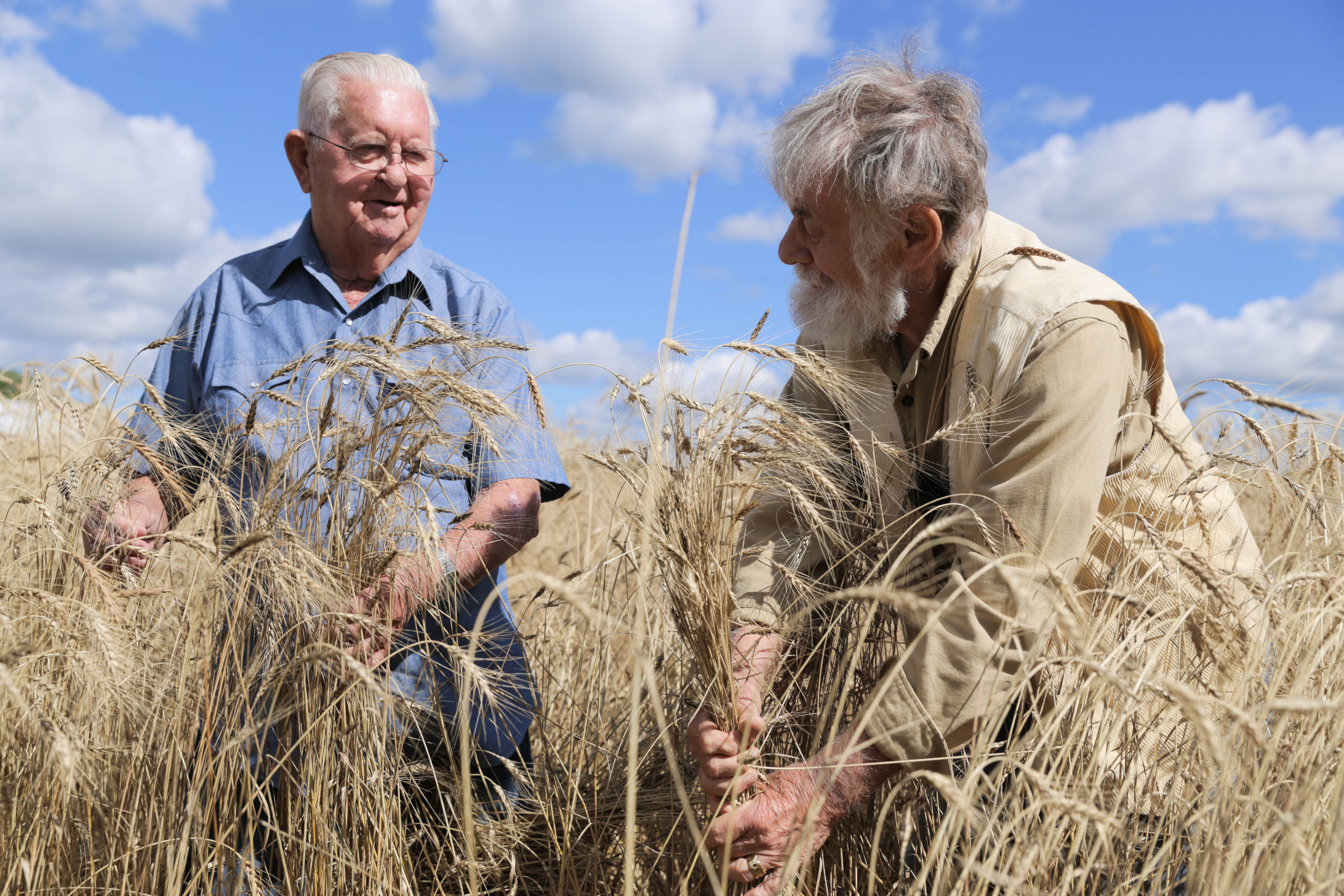 Ed was shocked to find out from Dale that he was standing before a direct descendant of these immigrants. Dale’s grandfathers and grandmother were among the children of the Mennonites who set down roots in Nebraska. “That started our conversation and a lifelong friendship. When you start talking to someone whose relatives are kind of in the middle of this … you kind of step back and let them do the talking,” Ed says.

Their conversations continued over the years along with the dream of growing Turkey Red Wheat in abundance, but they knew to pull this off they needed a buyer—some way to bring the grains to market and into the hands of local people. Then, around 2015 Ed ran into Jennifer Clark, DLM Bakery & Coffee Bar Retail Director at the time, while he was delivering Hill Family Farm Chicken to DLM. She approached Ed, who has since retired from the farm-fresh chicken business, to see if he knew of anyone growing soft winter wheat, which is more commonly grown in Ohio and can be used for cakes and pastries. He had something better to offer up—Turkey Red Wheat, a hard winter wheat that could be baked into bread should the yield be just right. From there, a spark was ignited, but questions loomed. Would this crop thrive on Ohio soil and if so, how would it behave when it came to baking bread? And who would actually farm it with Ed in his late seventies and Dale in his eighties at the time?

A RISKY VENTURE
A Turkey Red Wheat field is a beautiful sight. “It’s a wild, wild run … you see it dancing in the wind,” Ed marvels. When most people see a stump in the road, Ed will find a way around it. “When someone tells me I can’t do something, that’s a pretty good motivator,” he says. You see, Ed is the synapse that connects it all together with our story here, from cultivating a vision rooted in historical significance to figuring out the nuts and bolts so it can happen. Many didn’t think that it could be done.

One of those initial skeptics, Scott Fox, DLM’s VP of Bakery Operations who’s built our artisan bread program from the ground up, wears a big smile on his face as the wheat radiates a golden aura. “I’ve been a baker for 35 years and I’ve always been taught that good hard winter wheat had to come from out in The Plains States and that nothing would really work east of the Mississippi,” he says. “Much to my surprise, I love when I’m proved wrong.”

Many thanks goes to Danny Jones, the local farmer who was crazy enough to say “yes” to this venture. He reaches down and plucks off a wheat berry. It’s slightly gummy with a distinguishable sweetness that sets it apart from more conventional wheat. He can tell from the wheat berries when harvest is nearing, but the true test is to run a combine through and measure the moisture level. Danny chose to plant this crop directly next to his house so that others in the area could easily see it when they drove by. “Why don’t they do it … because it takes [more time] getting everything ready … but it’s all worth it,” Danny says. 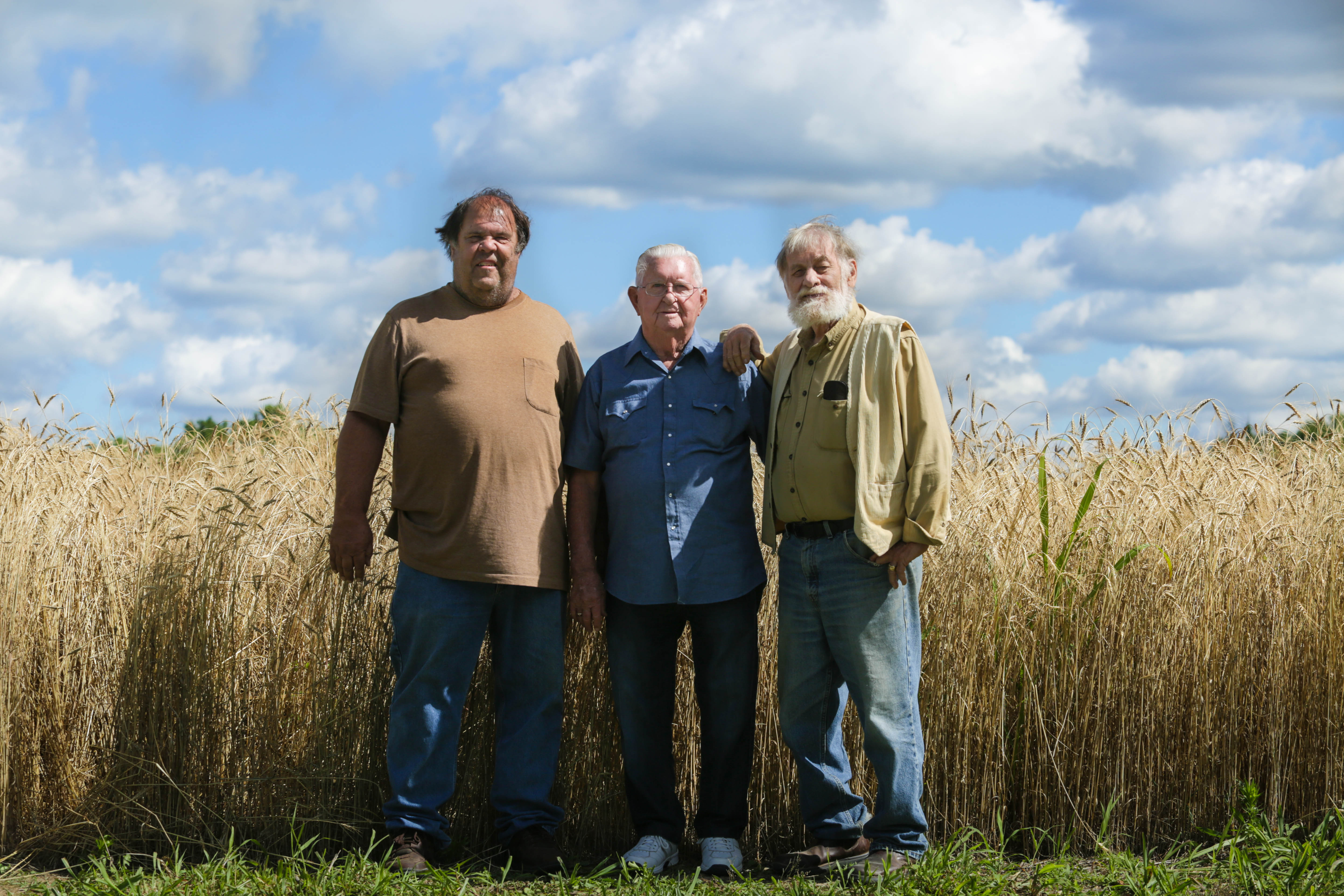 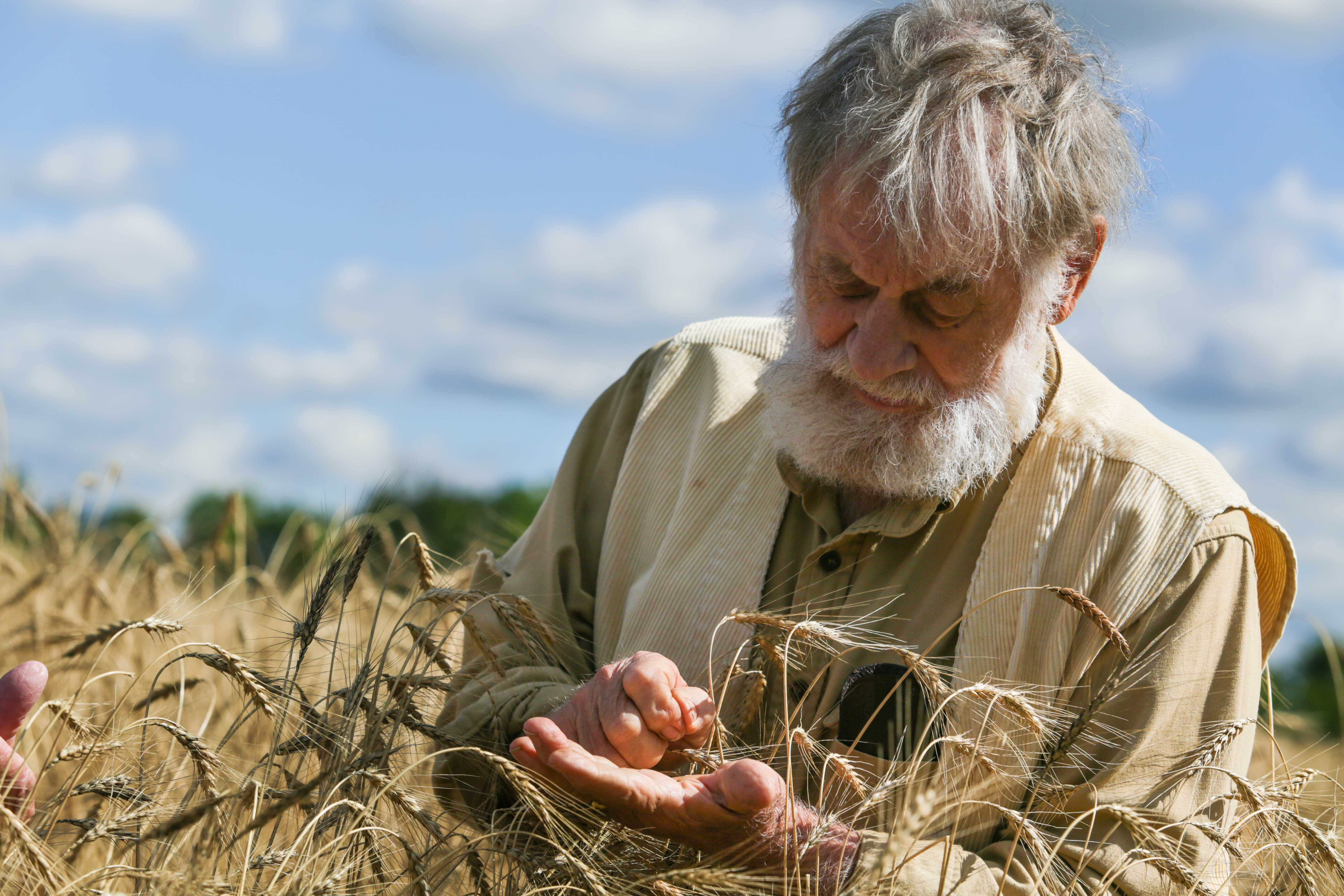 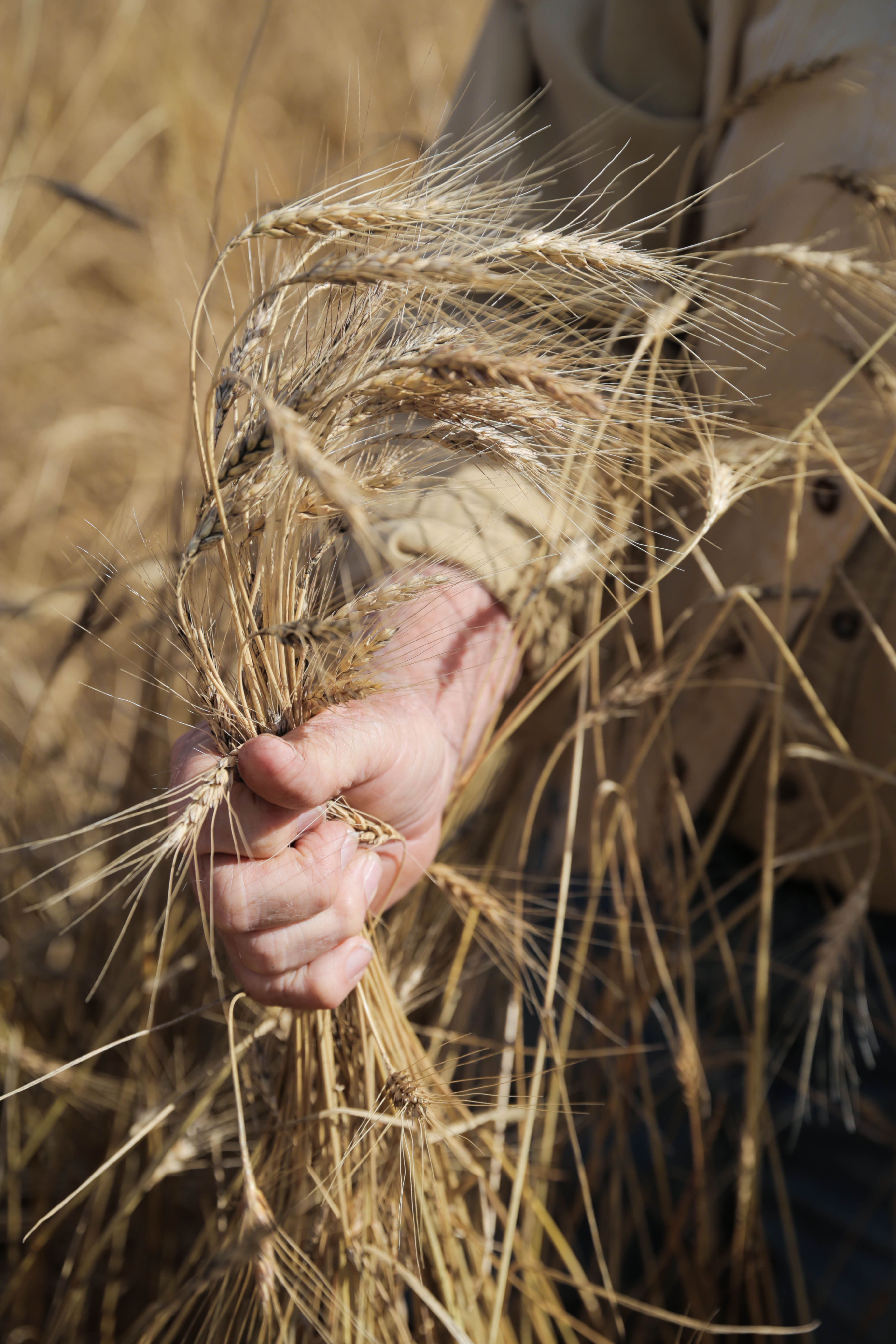 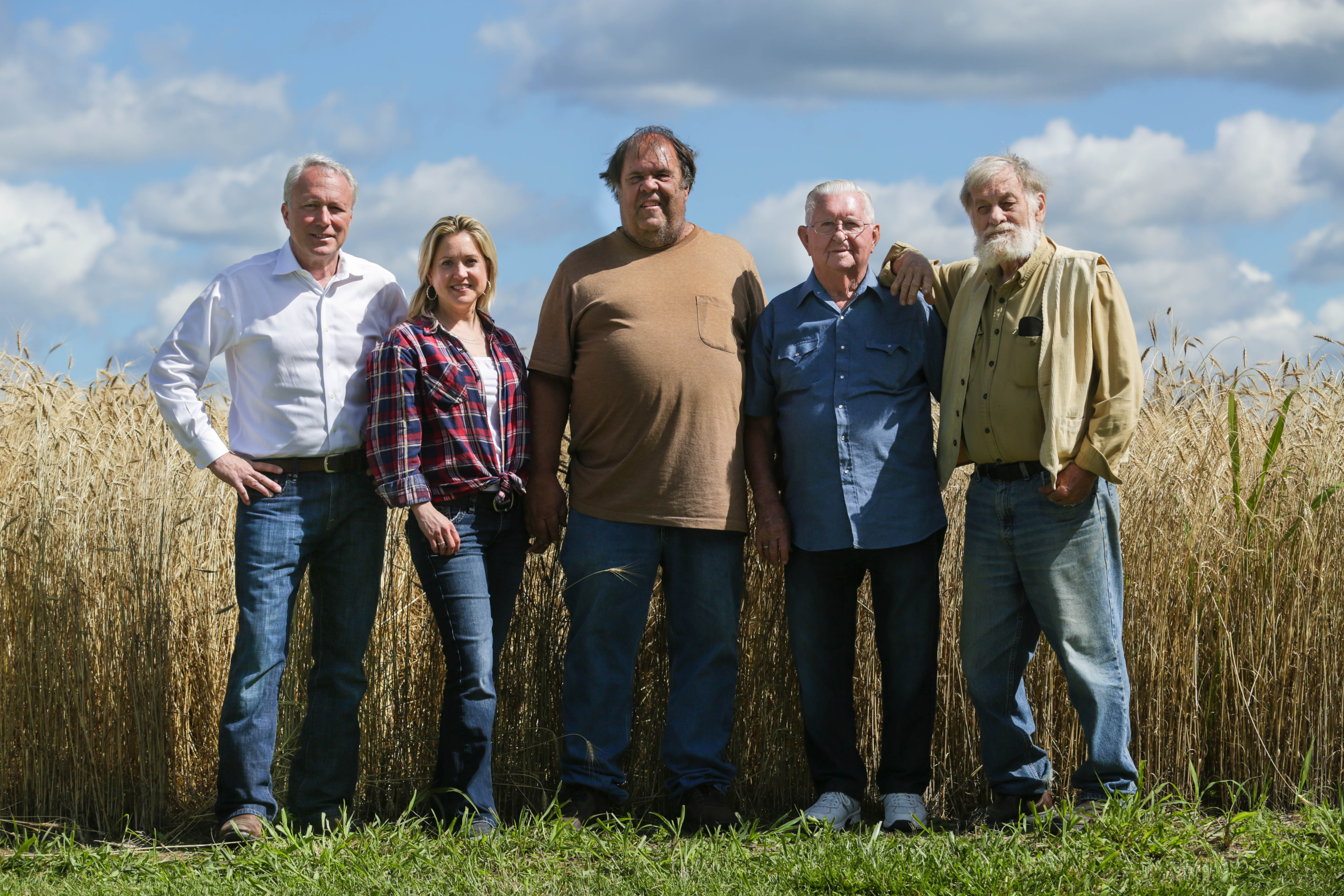 FORMING A LOCAL CIRCLE
So why did Danny say “yes,” a question that many area farmers have asked him? “It’s local. Somebody producing something local. Somebody using the local product.” He also just wanted to do something that’s not usually done. The unknowns of growing Turkey Red Wheat on his soil were like a puzzle waiting to be solved.

“Danny, he’s one of a kind. He makes it all happen,” Dale says. “I grew up where there was dryland farming. Water was a problem and rain was a problem. Here, moisture is not. Danny is so up on things, it really amazes me.” Dale’s recollection of farming Turkey Red Wheat in his youth comes together with Danny’s knowledge of the farmland here, and the results speak volumes. “Dale is probably the mastermind of how to grow it … and where to grow it, and when to grow it … and I just do the work that I think I know how to do,” Danny says. Ed fits in with his persistence and the historical context he brings to the table, having studied this grain, including records of it being farmed a century ago in Ohio. “That made me push on. Let’s do something here,” Ed says.

It’s the climate in Ohio that presents the greatest challenge, as Turkey Red Wheat is tall and events like rain, wind, and hail can bend it over. But, for some reason, it stands back up afterward. “We’re still learning what this wheat does and how it adapts to Ohio weather,” says Danny.

Although Ed, Danny, and Dale will sometimes have differing opinions on how to go about farming it, they all agree that this is just the start of something bigger. “I think we’re just hitting the tip of it with growing something local that can be made into bread locally and enjoyed by local people,” Danny says. 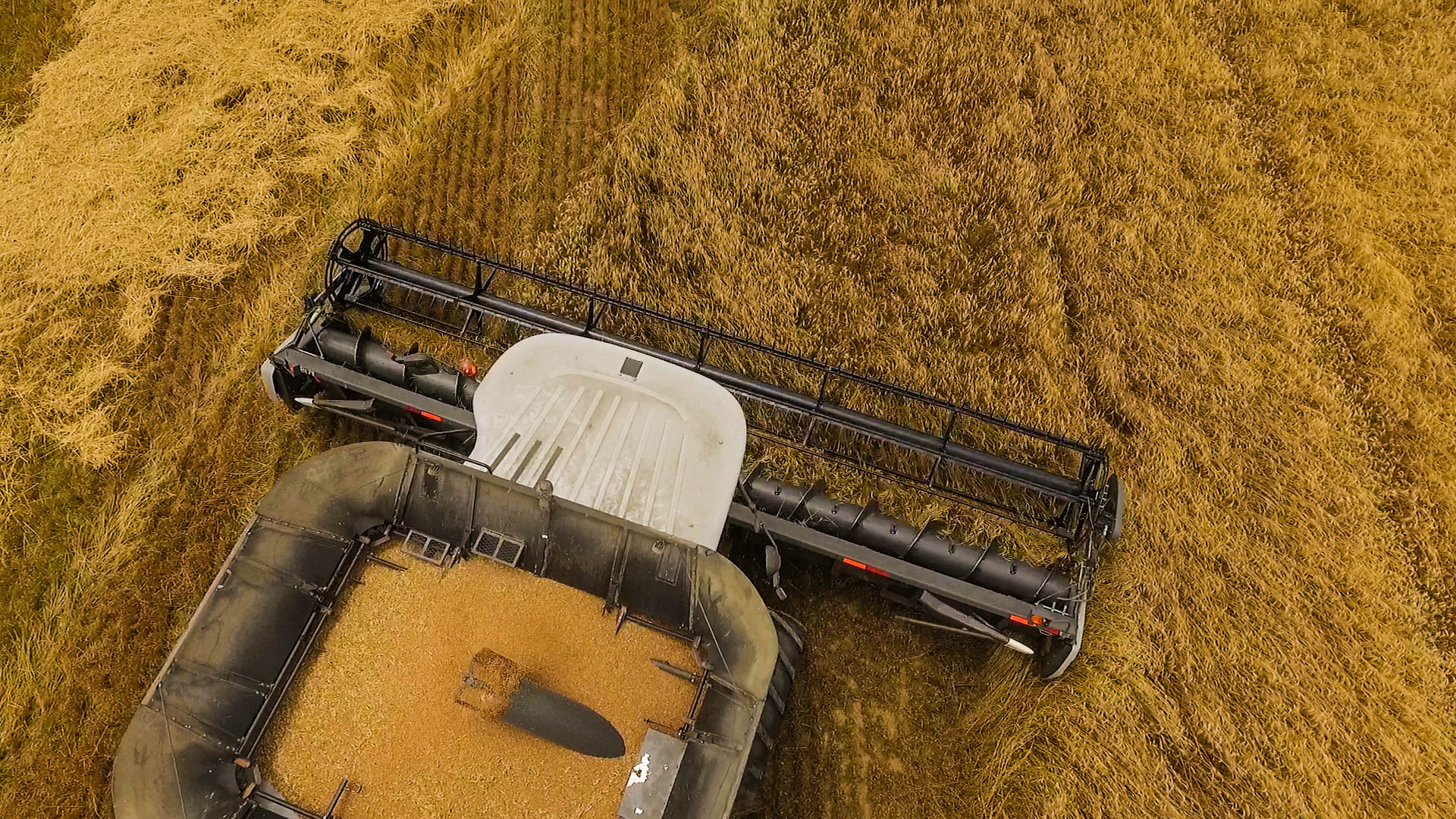 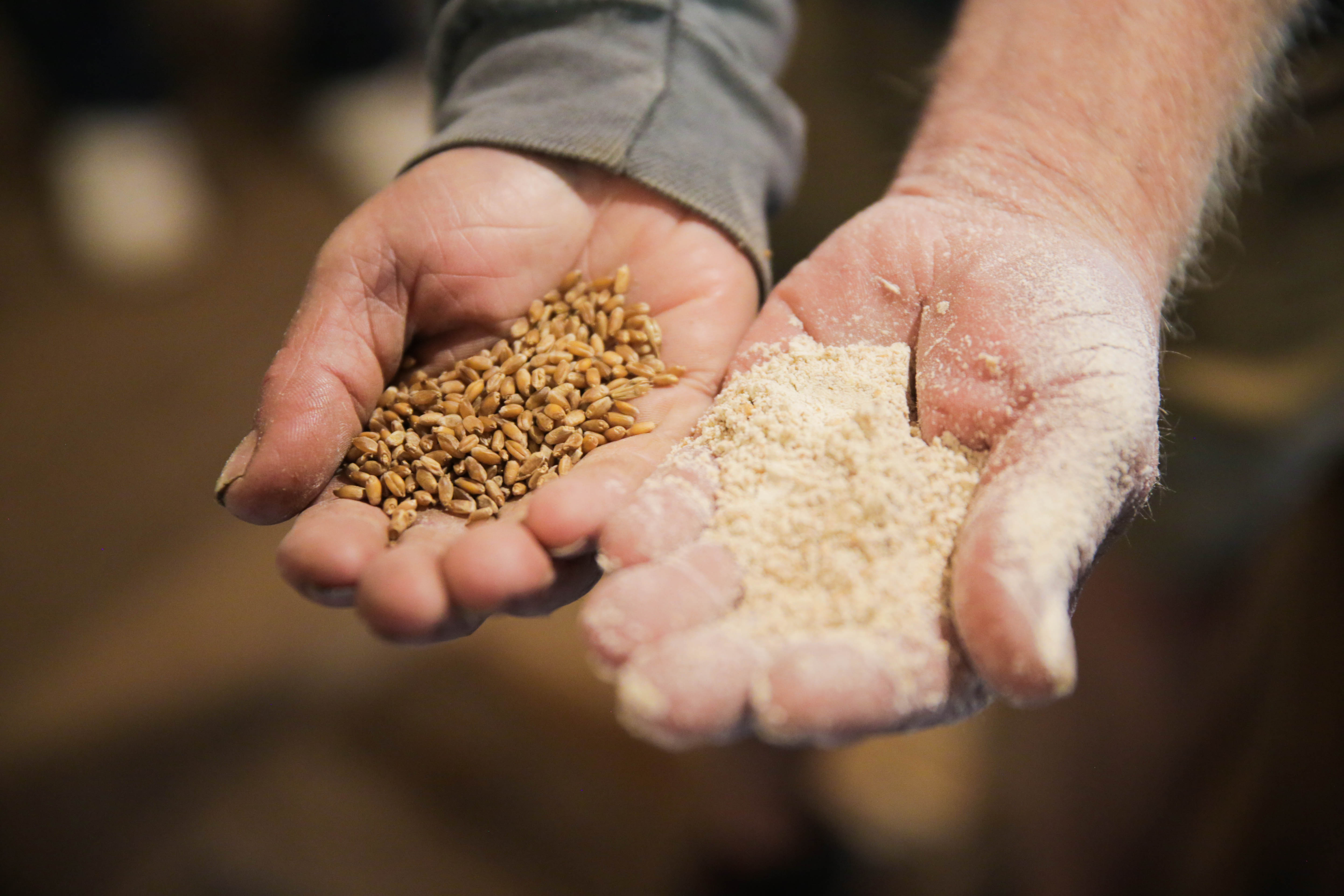 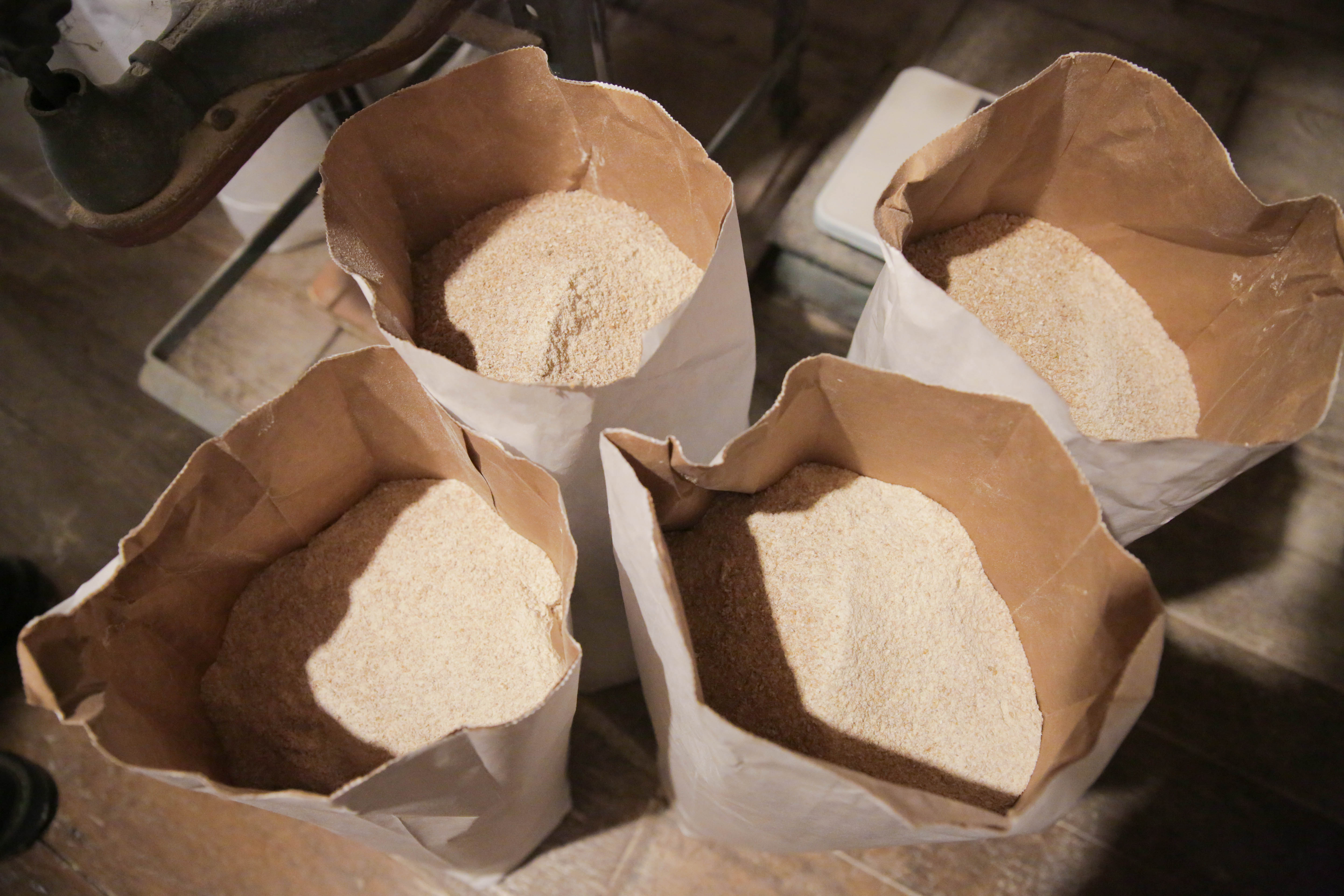 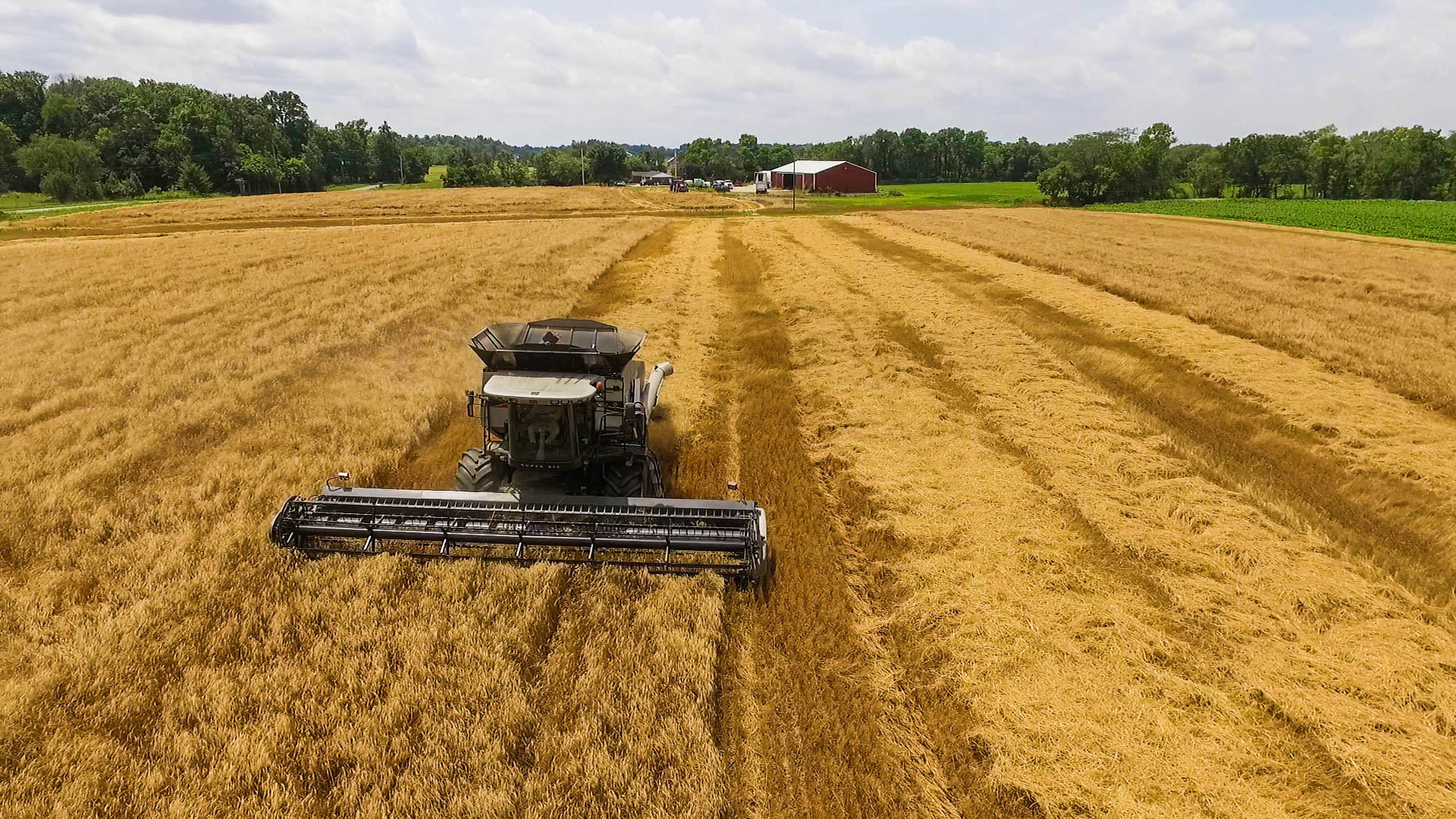 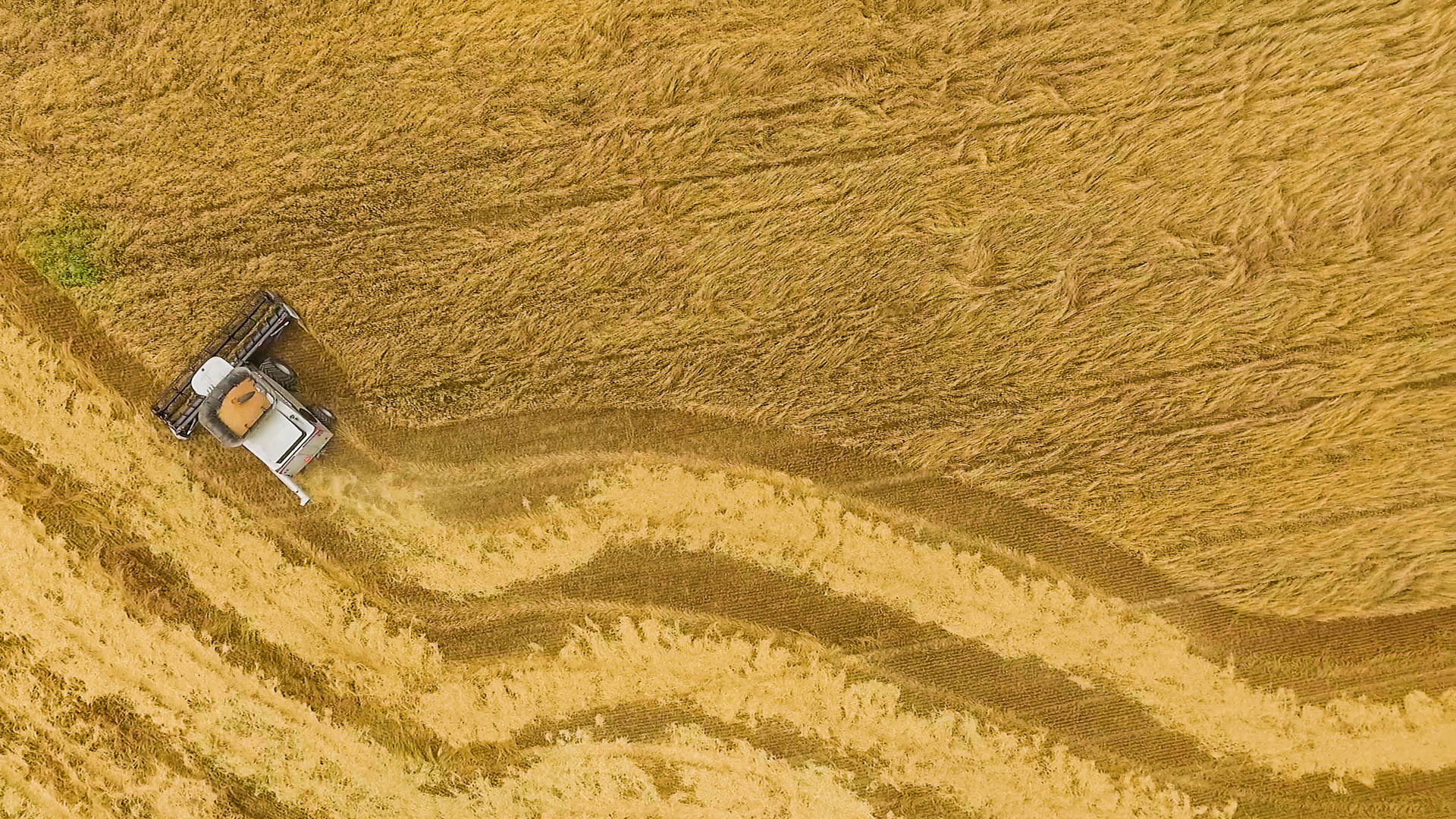 A CROP UNLIKE ANY OTHER
From the baking side, we have been amazed with the quality of bread that results from this wheat. The protein levels of bread play heavily into the science of baking, and we are amazed by that with each year's run, falling anywhere from 13.7% to 15.5%, which is impressive. “After the process of milling, what we find as far as bread-making is it likes a shorter fermentation time and the end product [has] got a little natural sweetness to it and also a really nice nutty flavor to it and we feel that Turkey Red Wheat … being that it’s never been hybridized … that your body tends to be able to digest it much easier,” Scott says. Jennifer adds that “it’s an heirloom grain that has not been messed with. You can trace it back to Biblical times. It’s not hybridized in any way. It’s wheat as your body knows wheat to really be.”

When we debuted our first limited run of Turkey Red Wheat Bread in 2016, the community gobbled it up quickly. The following year, DLM increased its investment from 2.5 acres in 2016 to 10 acres, then to 20-acres the following year. Now, the field is up to about 50 acres in 2022, and the crop is looking pretty strong as harvest day nears. In recent years, Dale, Ed, and Danny decided to buy the necessary equipment so that the wheat could be milled farmside into flour. From there, it is delivered throughout the year to the cadre of artisan bakers at Dorothy Lane Market who hand-shape each loaf and bake it into fresh artisan bread. This year, they are excited to create a Turkey Red Wheat Oatmeal Stout Pan Bread from it. “From farm to fork, we’re actually growing an un-hybridized, ancient grain … and we’re going to be selling it at Dorothy Lane Market’s three Bakeries,” Scott says. “This is where the future of artisan bread is going.” 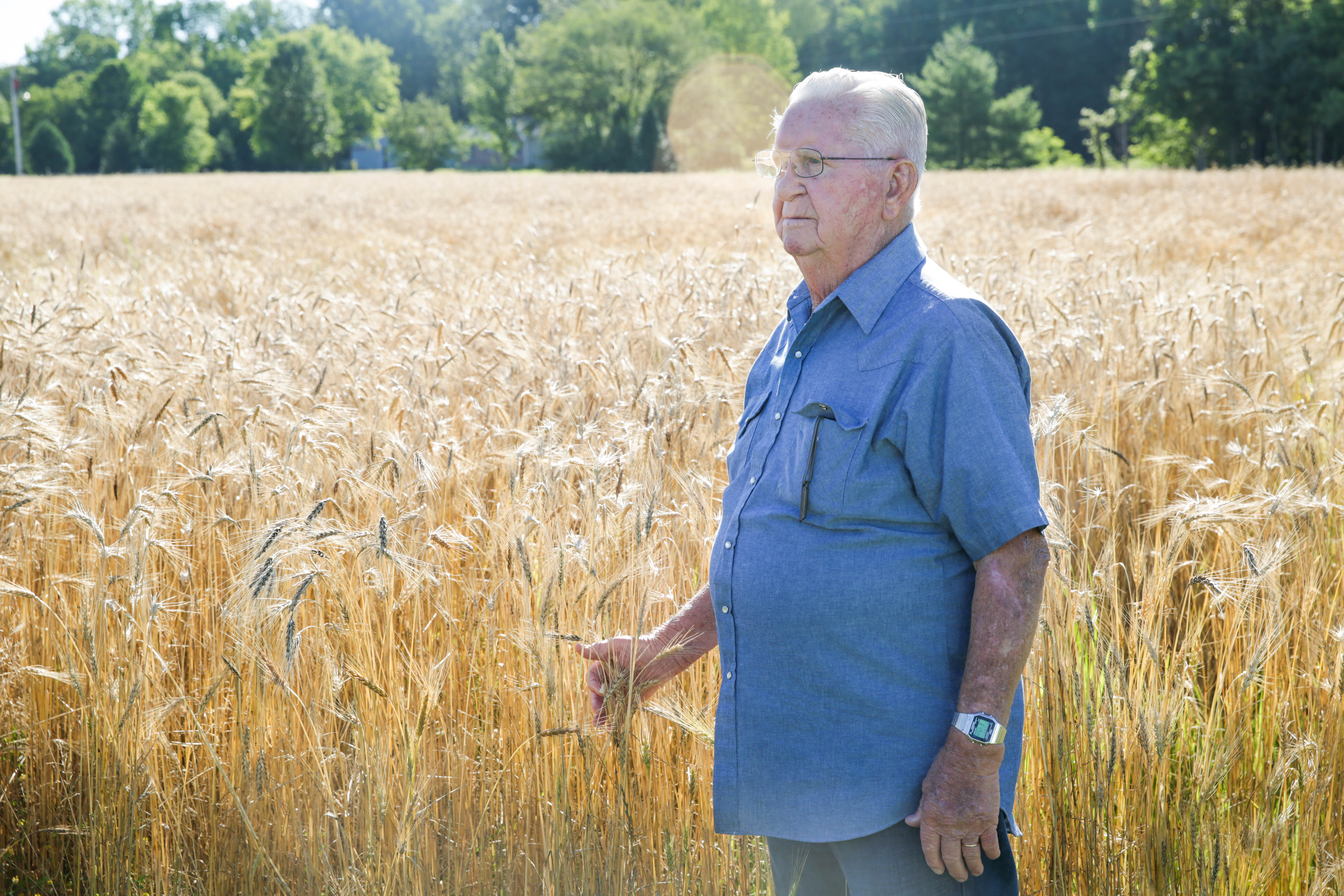 MORE THAN JUST A BREAD
The cutting edge nature of a grocery store to be growing its own wheat to be milled into flour and baked into bread is something unique that we never dreamed would be possible, but thanks to three men—Dale, Ed, and Danny—it is. At the heart of it all though is Dale and his connection to this heirloom grain through his ancestors and his childhood.

In his golden years, he’s doing something that he didn’t think was possible as he honors the legacy of his ancestors and shares that with his beloved local community. He sits at a picnic table next to the wheat field and his eyes glisten. “Never in my wildest dreams … To see that big of a field reminds me of what I grew up with.” Dale was born in Nebraska where his Mennonite ancestors settled when they came to America. He lived in a sod house and his family grew a Turkey Red Wheat crop every other year so that the land could have a year to rest and recoup its moisture. He recalls harvest time and the celebration that would occur afterward. “When that was growing and getting golden, it was the most beautiful thing you ever saw. This is just a good reminder of what I grew up with,” he says.

Twice a week, his mother would bake Turkey Red Wheat bread. Now, he can share that same taste with his children and grandchildren. Seeing Dale come to life with memories makes it all worth it for the circle of local partners gathered at the wheat field on this beautiful morning. “The most meaningful thing to me about this is absolutely Dale … because this has meant so much to him,” Jennifer says. “I want [people] to know that Dale Friesen and his family were stewards of this heirloom grain and how important it is in history. And that we are proud to partner with [Dale, Danny, and Ed] to bring this to your tables.”

Such an awesome story and a great partnership with DLM! My mouth was watering just watching the video--I could almost taste the bread. Bravo!

Thanks so much for sharing your beautiful story of these three friends who are making it possible for all of DLM customers to share in eating this wonderful bread.

Excellent story DLM. I’m a 10-Grain customer most of the time, but this wonderful video sold me on the local craftsmanship of Turkey Red Wheat. I’ll get a loaf next time I’m in the SPRINGBORO store.

We have seen your article on the turkey-red wheat. Dale Friesen is my brother and we were wanting to buy the turkey-red flour to make our own bread. I did order a loaf of bread from you, it was great.