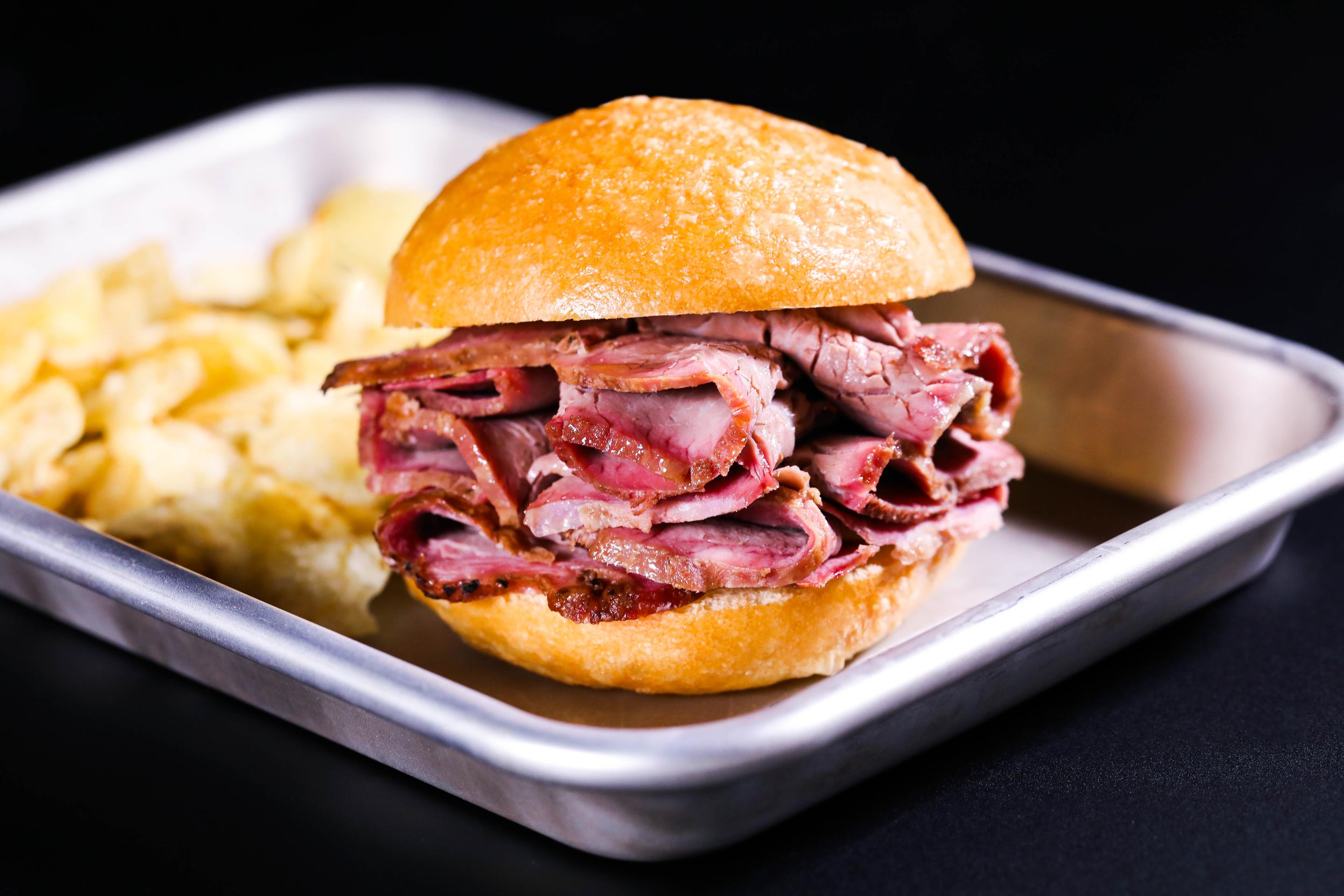 Night owl Rob Turner just may have one of the coolest titles—official DLM Pit Master. If you’re ever taking a walk in one of the neighborhoods surrounding DLM Washington Square where our massive smoker is based, Rob apologizes, because you’re gonna be hungry. It’s a balmy night in July and as our stores slow to a quiet hum for the night, Rob is starting his shift. He’s got hundreds of pounds of beef barbacoa loaded on the 15 racks of our massive smoker. They’ve been smoking for about eleven hours with hickory. He unlatches the smoker and slowly opens it. Smoke uncurls and wildly travels into the night sky. He is right—the smell is phenomenal.

The well-marbled boneless chuck roast sports a charred exterior, which Rob explains is the “bark” and what you are looking to achieve when smoking meats like this. Don’t be fooled though by the tough exterior (of Rob or the barbacoa). The meat is fall-apart tender, and as the pit master empties each rack he starts to shred it immediately. “My job doesn’t feel like a job because I love it so much,” he interjects.

Smoke billows from the piping-hot shredded meat as it hits the night air. He pushes the meat on a cart inside. Heads turn, and Rob lights up and keeps moving as he hears the chorus of excitement that the smell elicits from his fellow night owls. 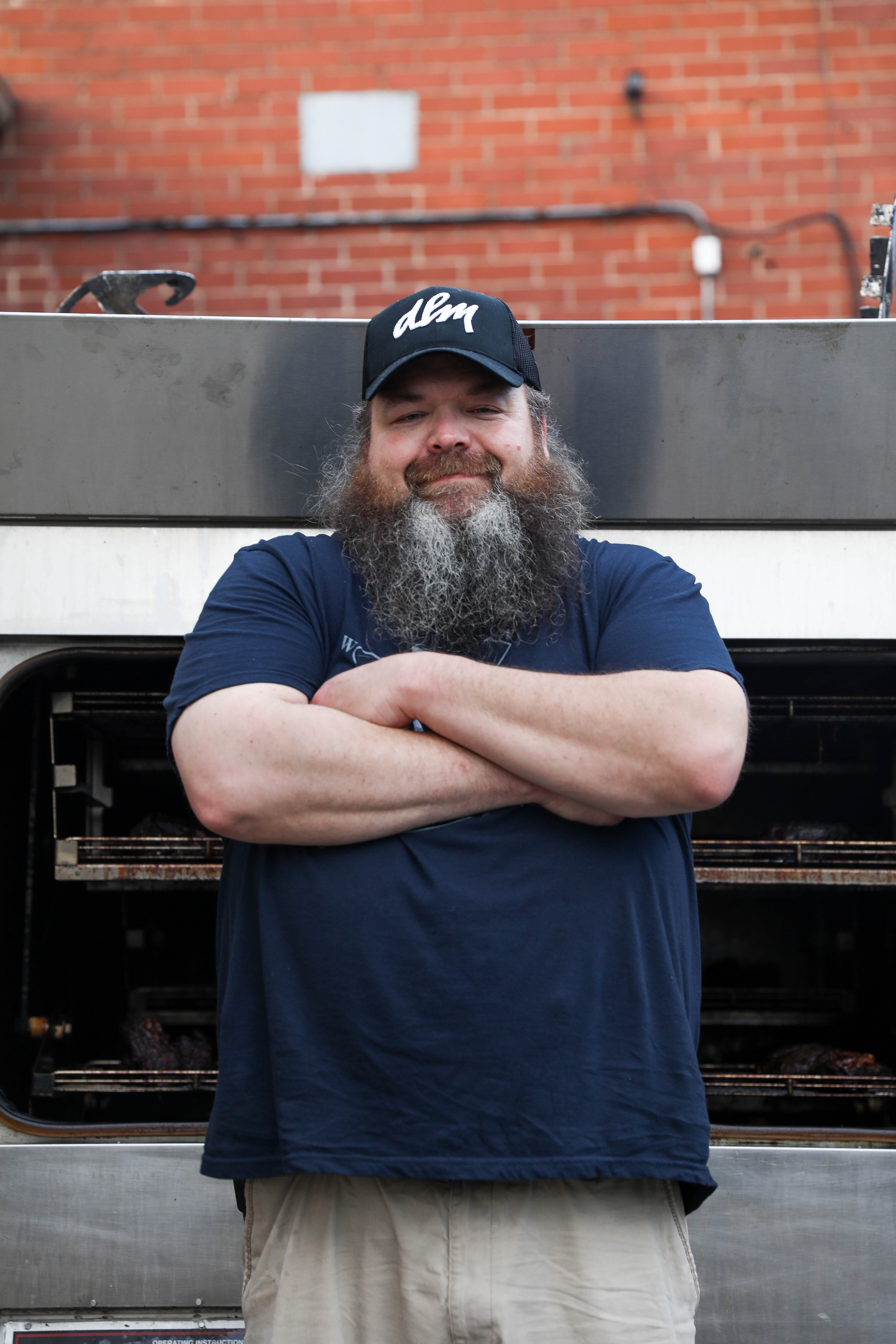 The store is quiet. Most of the second shifters are gone for the evening, with the exception of a few who are curious to see what Rob is working on tonight. Guns N’ Roses wanes from a stereo in the Meat department, and the lyrics “Knock, Knock, Knockin’ on Heaven’s Door” intersperse with the the squeaky wheel of the cart.

Rob continues to carefully work with the beef barbacoa. It was about a year ago when DLM decided to grow the smoked meats program by dedicating a full-time pit master to master the craft, who would fuel the appetites of all three stores. With the massive smoker hard at work, it was becoming more and more apparent that with the right person, it could be pulled out not just for limited-time products and cookouts, but a full line of Smoked Right Here meats, ready to take home and reheat.

Enter Rob. Smoking meats had always been a hobby for him for 15+ years—one that he was very good at. It wasn’t uncommon for someone to hire Rob to smoke a full pig for a special event. When he was approached about making his hobby his job, he replied, “if we are going to do it, we need to to go pro and do it right.” After a year, the smoked meats have grown by nearly 600%. We see what Rob means by “go pro” as the product speaks for itself, with mainly word-of-mouth marketing in garnering repeat customers. 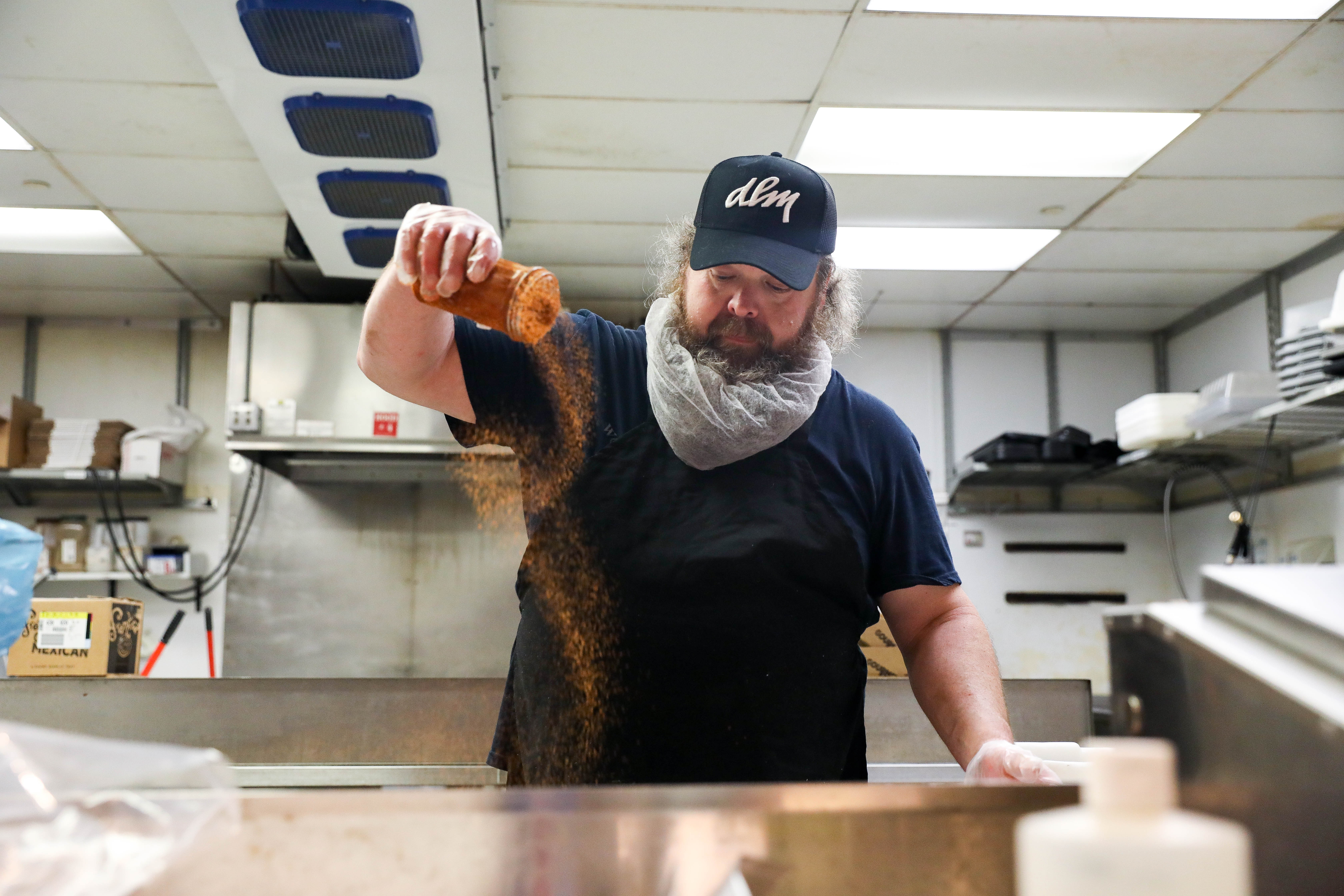 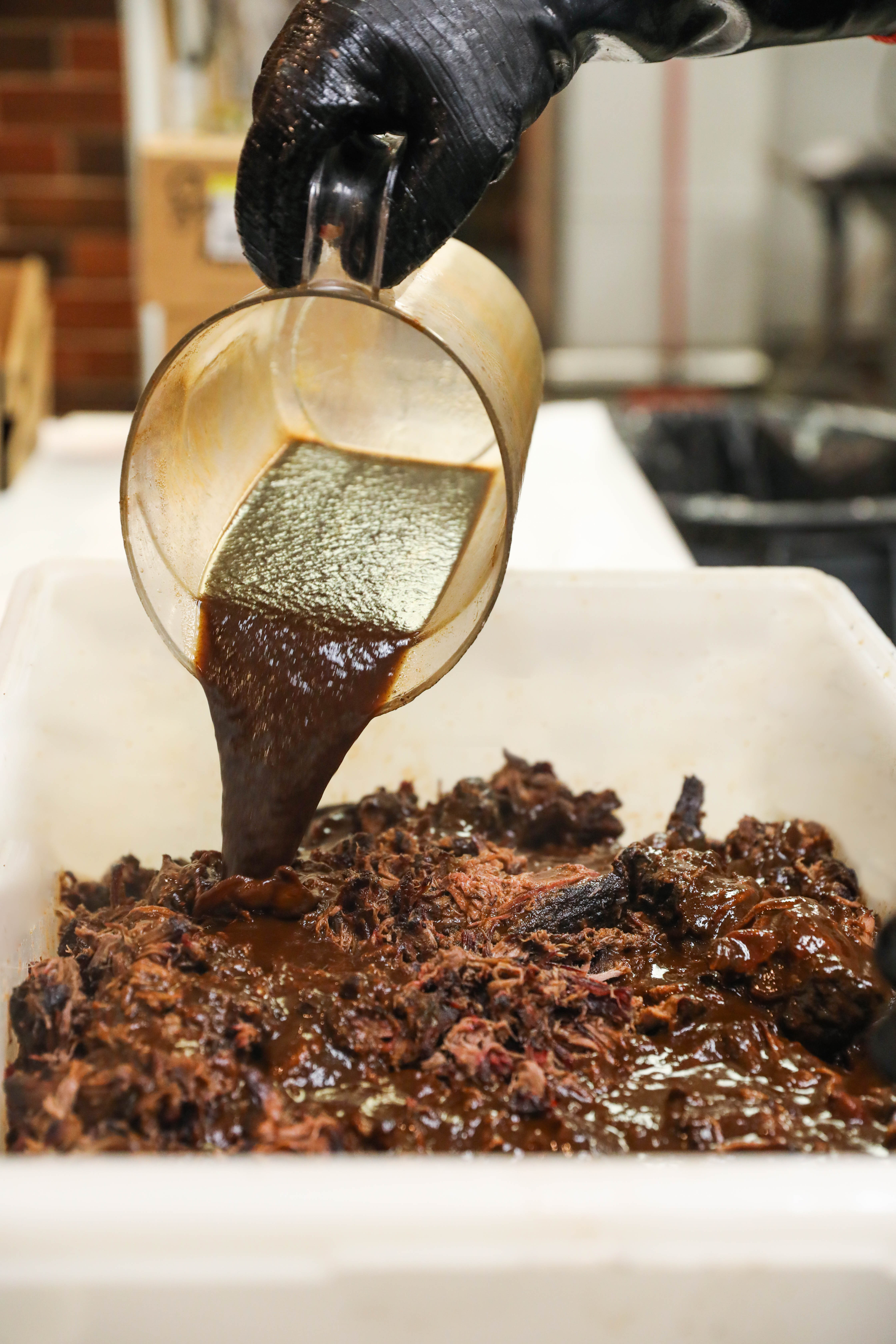 Whether he’s smoking poultry, pork, or beef, each product has a different recipe and prep, often with a dry rub prior to going into the smoker. Rob is meticulous about keeping a log of the results from each smoking cycle, noting what works and what doesn’t, and experimenting as time allows. After he finishes the barbacoa, he begins prepping poultry, both chicken and massive Bowman & Landes turkey legs that weigh about 4 lbs prior to being smoked. He notes that although the poultry items can be smoked together, you’d never smoke them with pork, for example. “Although it’s third shift, we always do everything in line with food safety for the customers,” Rob says.

With the DLM Smoked Meats rising in popularity, Rob says the sky is the limit and he’s ready to keep fanning the flame. “I get to enjoy my hobby and get paid. If you love it, why not do it and you can succeed,” he says. 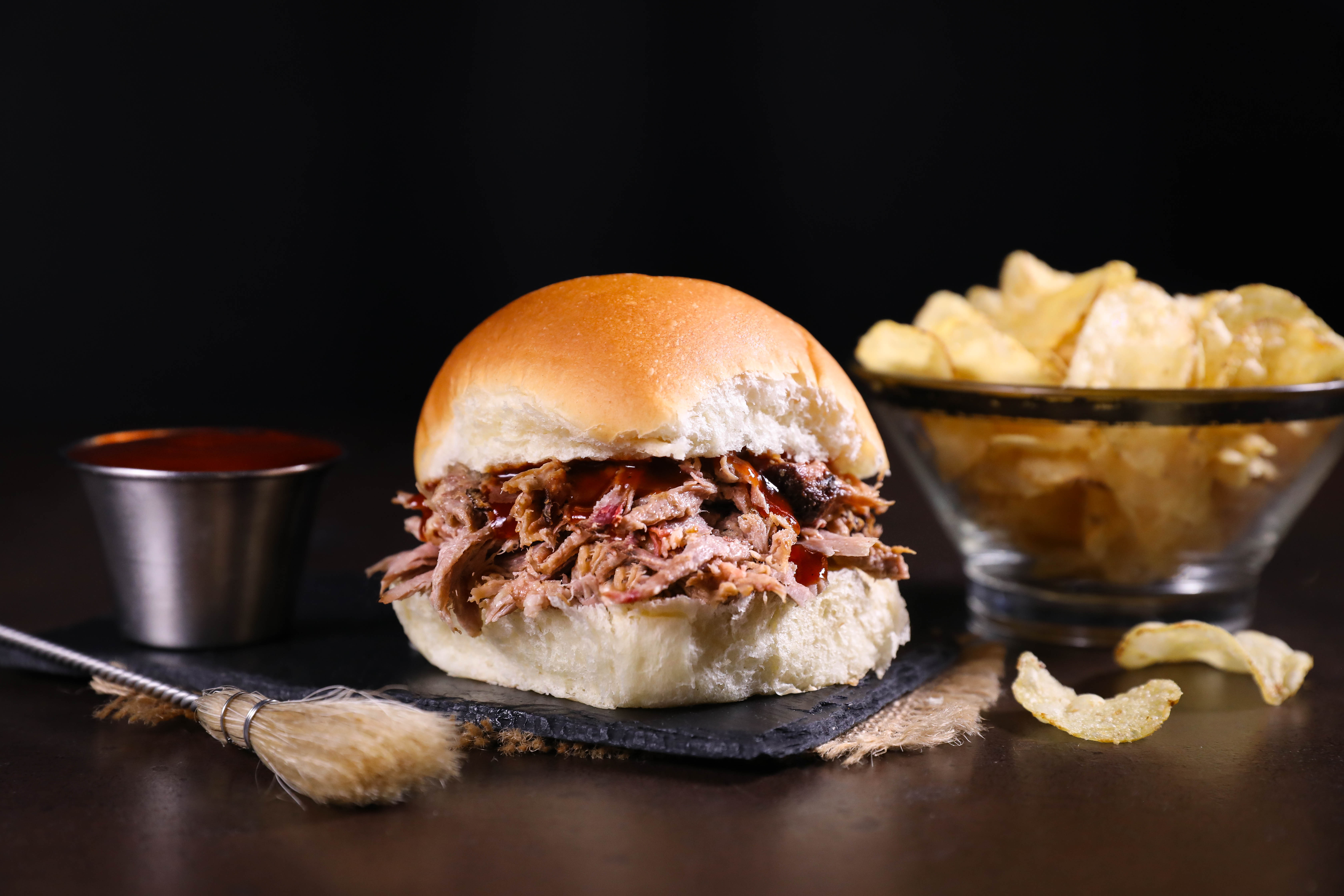 It’s about 10 p.m. and time to put the poultry to bed so Rob can pull them before his shift is over. A light shines down on the smoker and he glances around his feet before carefully taking his next step. “There you are Timmy,” he remarks, pointing to a curious toad that often hangs out on the asphalt outside at night. Third shift can be quiet and laid back, but with a big personality like Rob who has a passion for perfecting his craft, there’s always excitement in the air at DLM after hours.