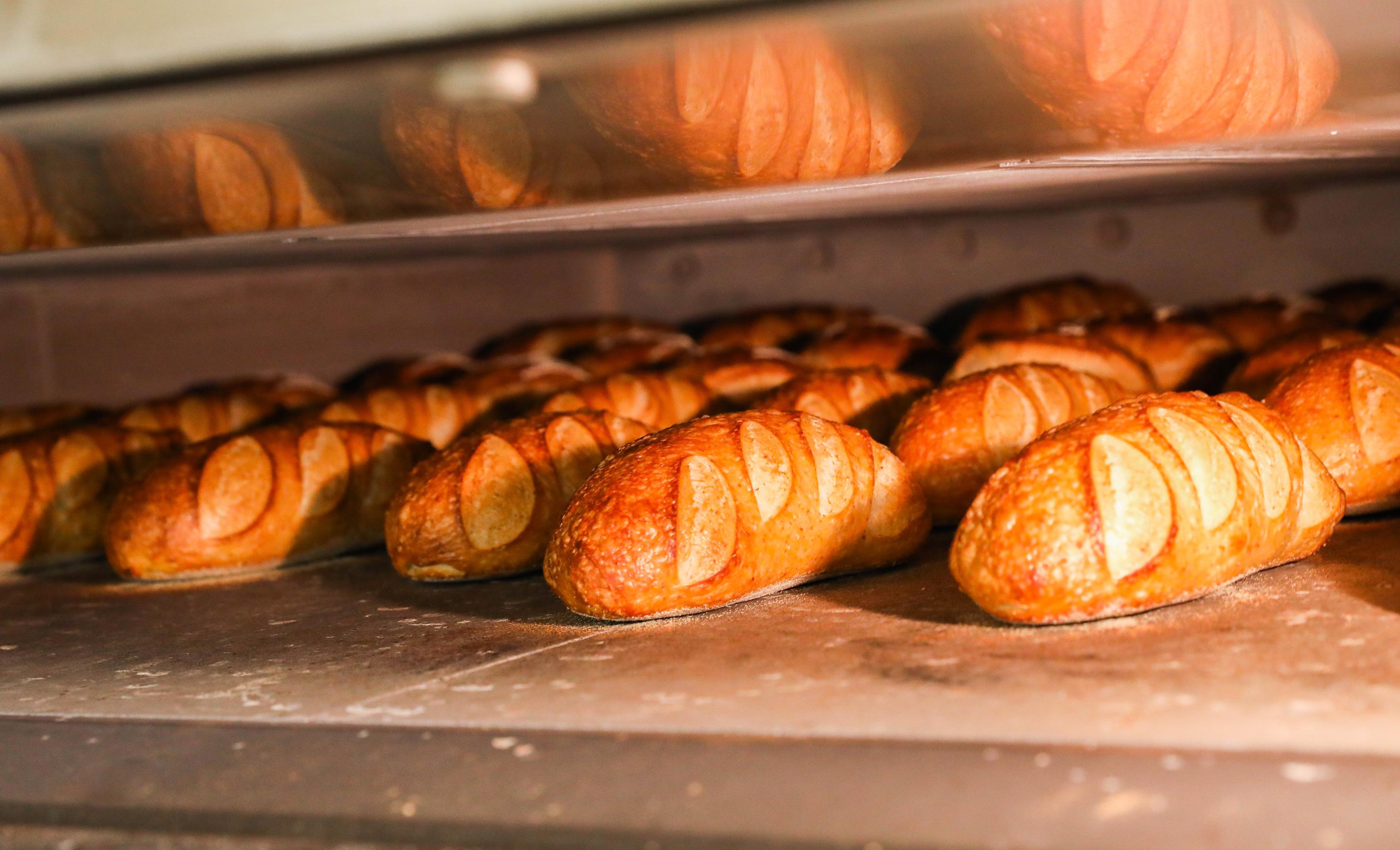 To me, our Artisan Bread, which launched in 1994, is the foundation of the DLM Bakery. When you bite into its perfectly golden, chewy crust that houses an airy interior, you know that it’s something special baked from scratch using old-world methods, natural fermentation, and time-honored techniques. What many people don’t realize is that there’s more to baking bread than just following a recipe. It’s having the instincts, the touch, and the knowledge to know just what to do with the dough, and how the most subtle variations, like the humidity that day or temperature of an ingredient, can make a difference in the end result unless you know just what to do. And our bakers are second to none. If you’d add up the number of years of experience that they have, there’s 126 years, and they make sure that each batch properly makes the journey from simple ingredients to a beautiful loaf of Artisan Bread.

Often, I’ll go to bed and awake in the middle of the night humbled to think that our third shift bakers are hard at work, ushering the loaves through our massive hearth oven—the final leg of the journey before they are delivered to each store for you to shop. We do this every day, and as you keep reading, we hope to show you the journey that each loaf takes, starting in the dark hours of the morning.

We go behind the scenes at the DLM Bakehouse starting bright and early on a Thursday, tracking a batch of Farmhouse Bread from beginning to end. Article by DLM’s Jessie Kuhn, Bakehouse photography by DLM’s Natalie Kratz.

Travis Weller is starting his day at the DLM Bakehouse. As the manager of the Bakehouse, he oversees the day-to-day Artisan Bread process and also helps develop new products and techniques, along with Scott. He will jump into different roles as needed, like today, as he’s the mixer. Lots of dominoes fall in place throughout the day for the end result, but it all starts here with two giant mixing bowls. The bread he’s mixing this morning won’t even be baked until third shift comes in that evening to be ready for Friday morning’s selection. He reviews the orders placed by each store’s Bakery manager. He’ll be mixing about 3,000 lbs of dough this morning.

It’s quiet in the darkness of the early morning, but as you enter the Bakehouse music can be heard over the hum of the mixer as a batch of New York Rye is in the works. Travis is intently leaning over a printed recipe, quickly calculating the ratios of each ingredient based on how much is needed for the next day’s bread orders. “Mixing is great because it’s all about the science and math,” he says. “This position is the heartbeat of the department.” If the mixer is slow, then the bench (the next stage) is waiting. If you move too quickly, you risk making a mistake. Everything is deliberate.

The batch of Farmhouse starts with our French levain, or “mother dough.” This, along with our Sourdough starter, was developed by Scott in 1993, and came with him to DLM to launch our Artisan Bread program in 1994. This all-natural, wild yeast is what raises the final dough and adds unique character to its flavor. Water begins to cycle into the mixer and a few other ingredients are added as it gently turns.

It’s humid today, so Travis knows that no matter what he calculates from the recipe, he’ll need to add extra flour, which he does instinctively. As he hauls 50-lb bags of King Arthur Organic Flour, it’s clear that this job isn’t just about mental strength, but it is physical as well. The mixer lid drops. 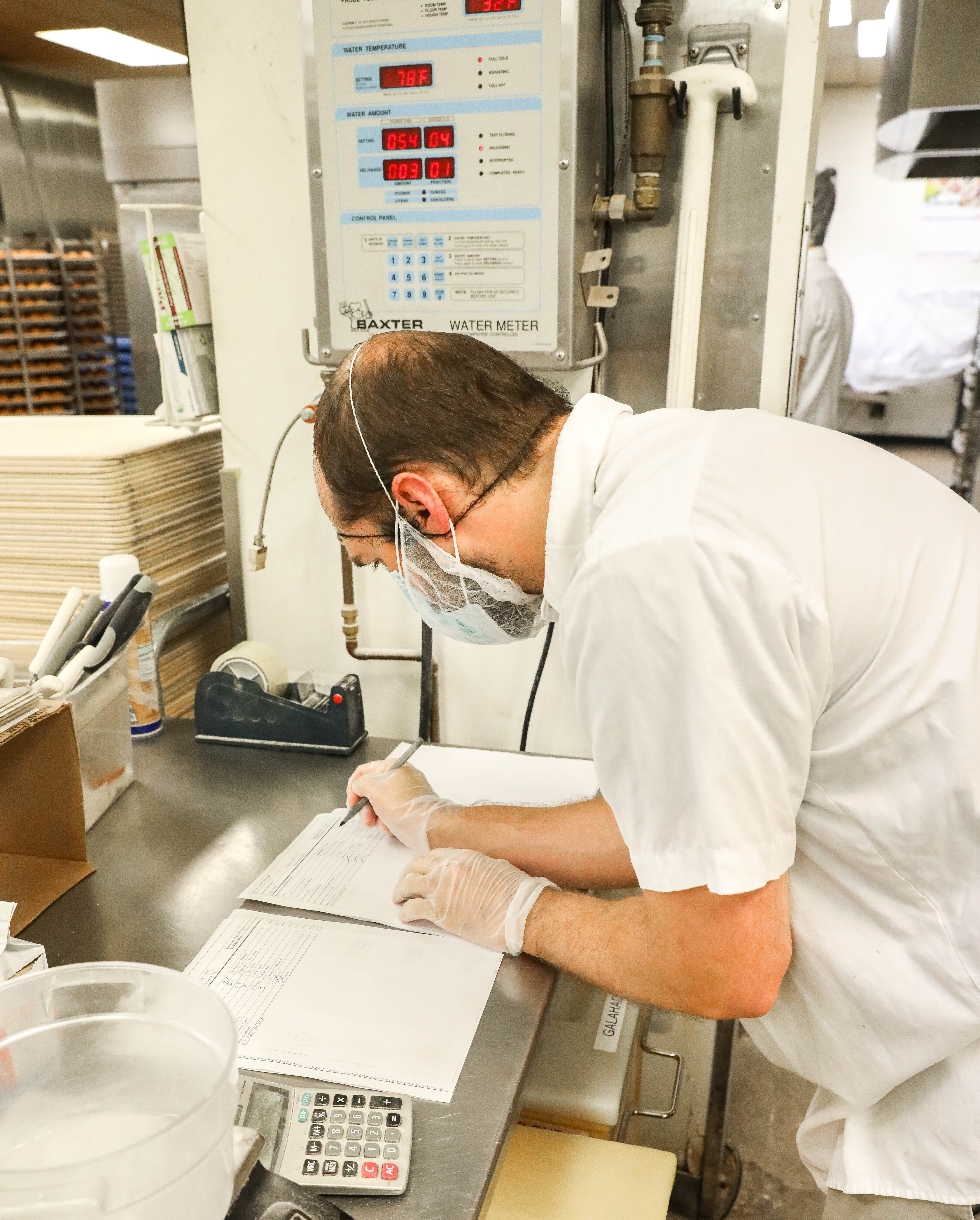 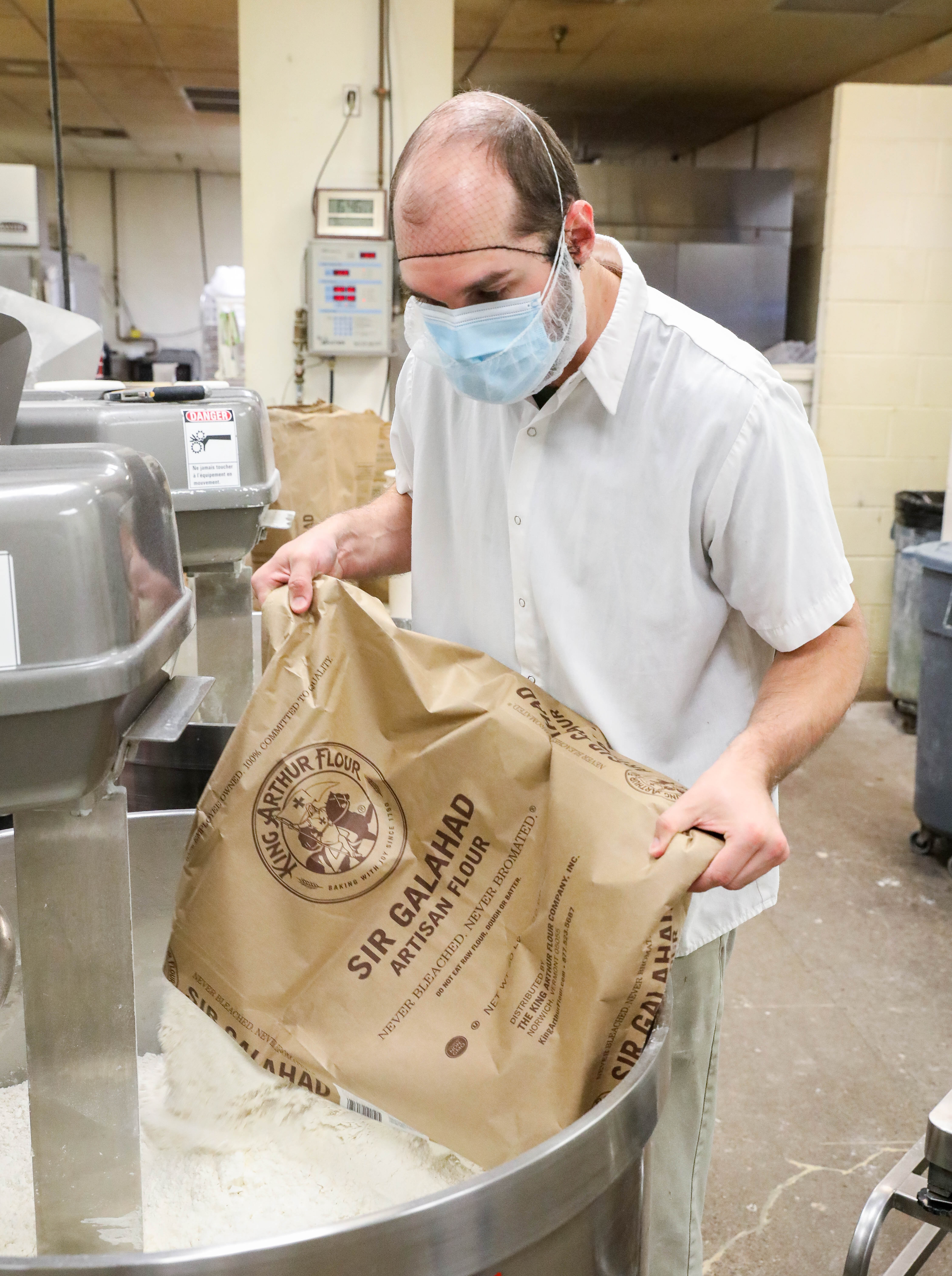 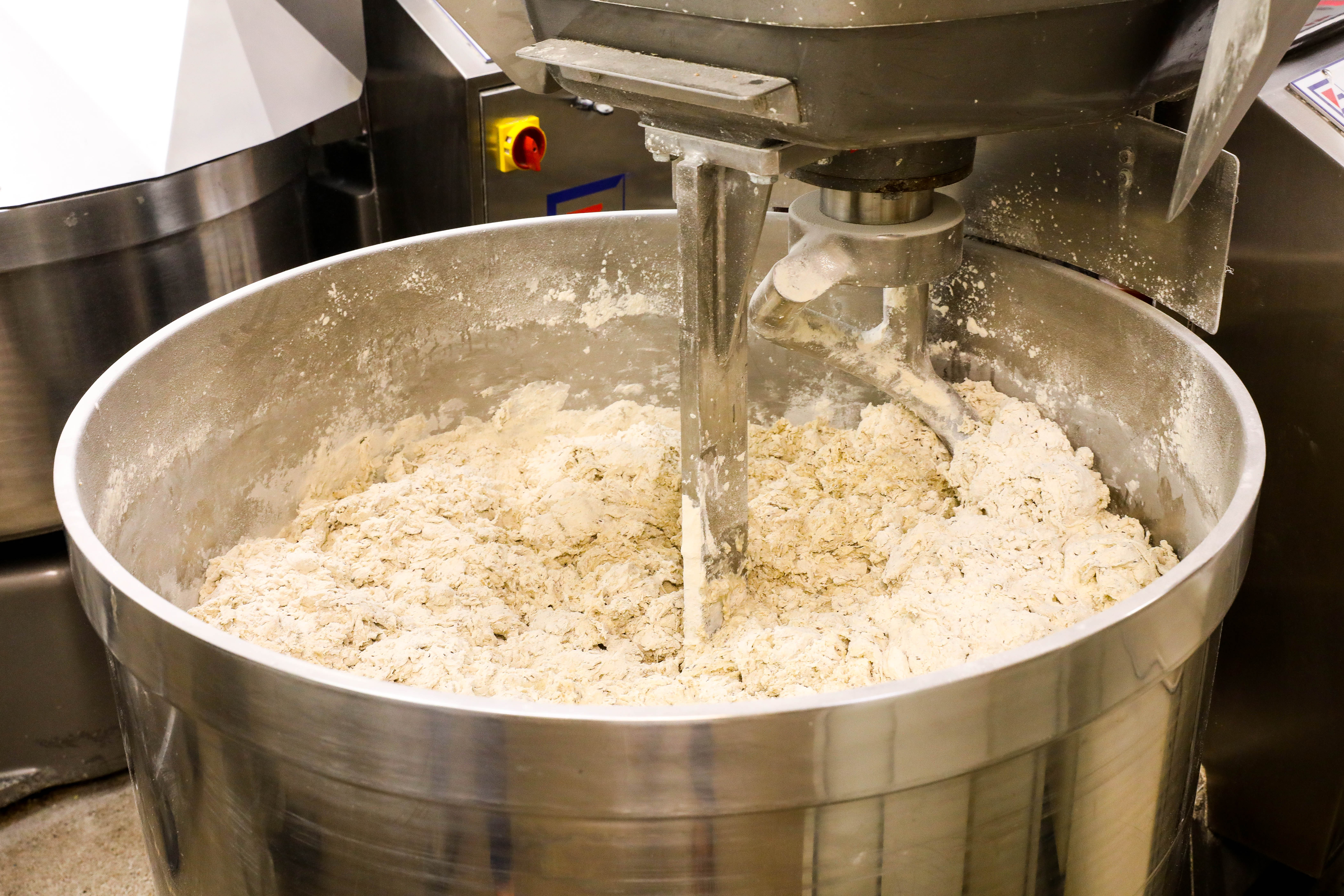 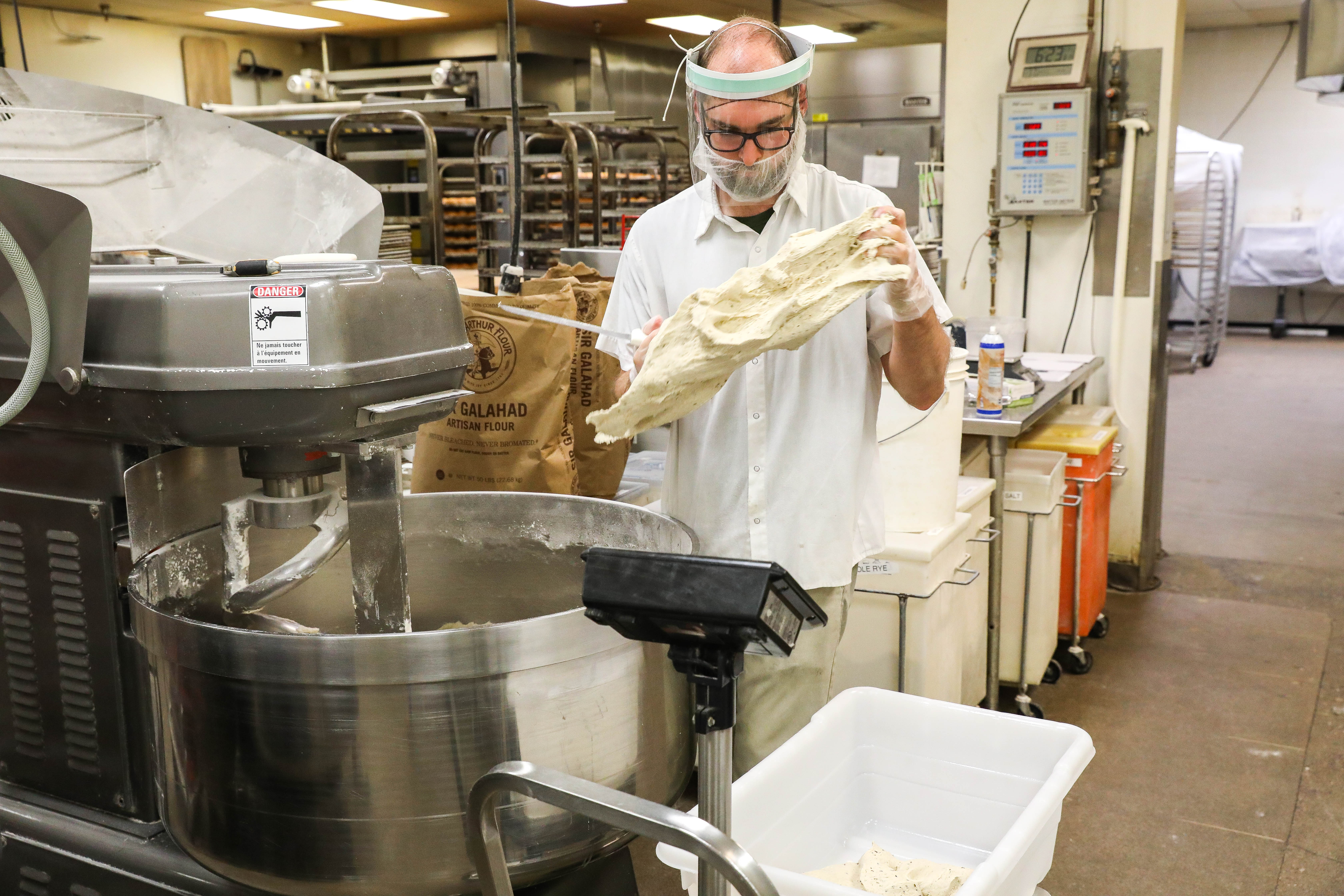 After examining the dough, the strenuous math continues as it’s ready to be cut and divided up into bins containing particular increments. In the top bins, he measures out enough dough for what we call “Deli loaves” as this is the that we use at our Sandwich Station. Then, he uses the bins beneath to house the dough that’ll be used for the Farmhouse loaves and DLM Signature Rounds. The dough then goes into a cooler to rest and bulk ferment for a few hours before moving to the “bench” area.

Jeff Lofino, who has been with DLM for 10 years, and Kevin Blackford, 12 years, are ready to help take the dough that Travis mixed into its next stage. It’s their job to assess if the dough is ready for the bench, as environmental factors are always at play. Flour that’s used too soon after coming off of a cold truck is just one example. They wheel over the bins of Farmhouse and explain how the bench is where the dough is shaped. You may be surprised to learn that this doesn’t just happen once.

The first shaping of the dough happens by hand. They start first with the 4-lb Deli loaves, which Jeff weighs on a table scale and tosses to Kevin, who does the first shaping, rolling them by hand with ease into large loaves. Within a few minutes, they’re ready to move on to the Farmhouse rounds and then the loaves. They move completely in sync as Jeff cuts the dough before joining Kevin in shaping them. They are constantly assessing the batches to see which is ready to process next. “It could be as simple as where they are in the room,” he says. They move on to shaping other doughs after the Farmhouse. Once complete, they take a break while the dough continues to rest. 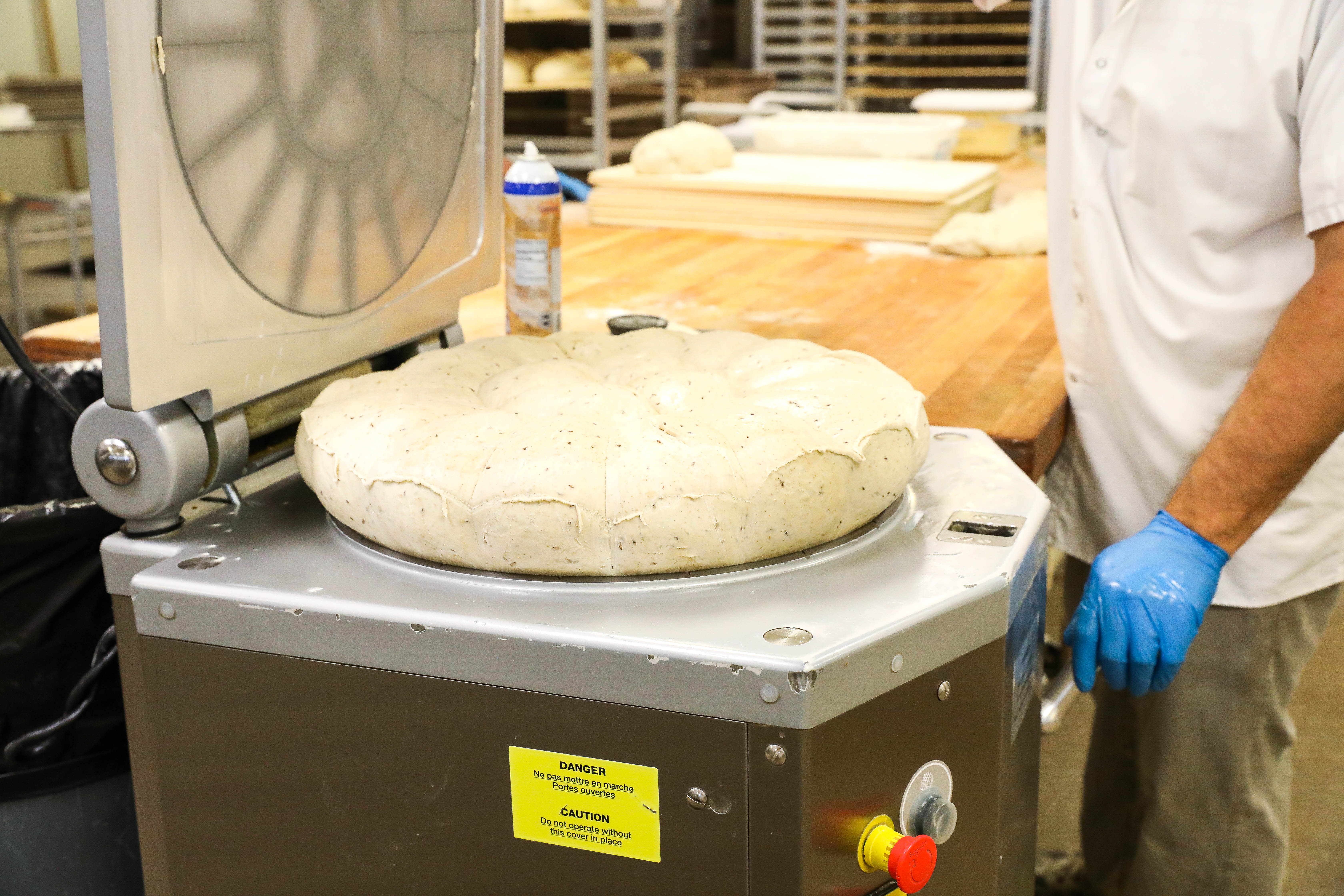 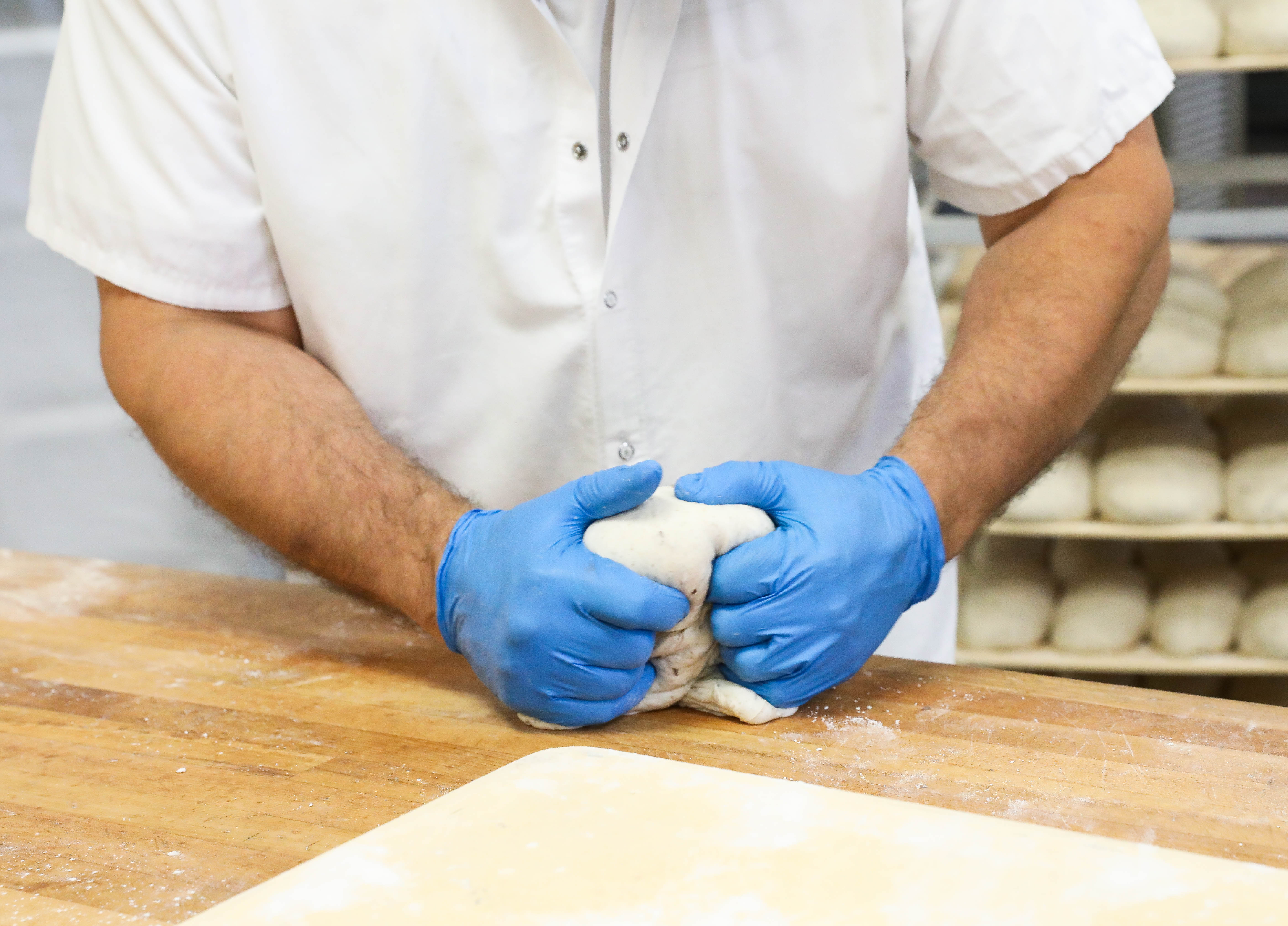 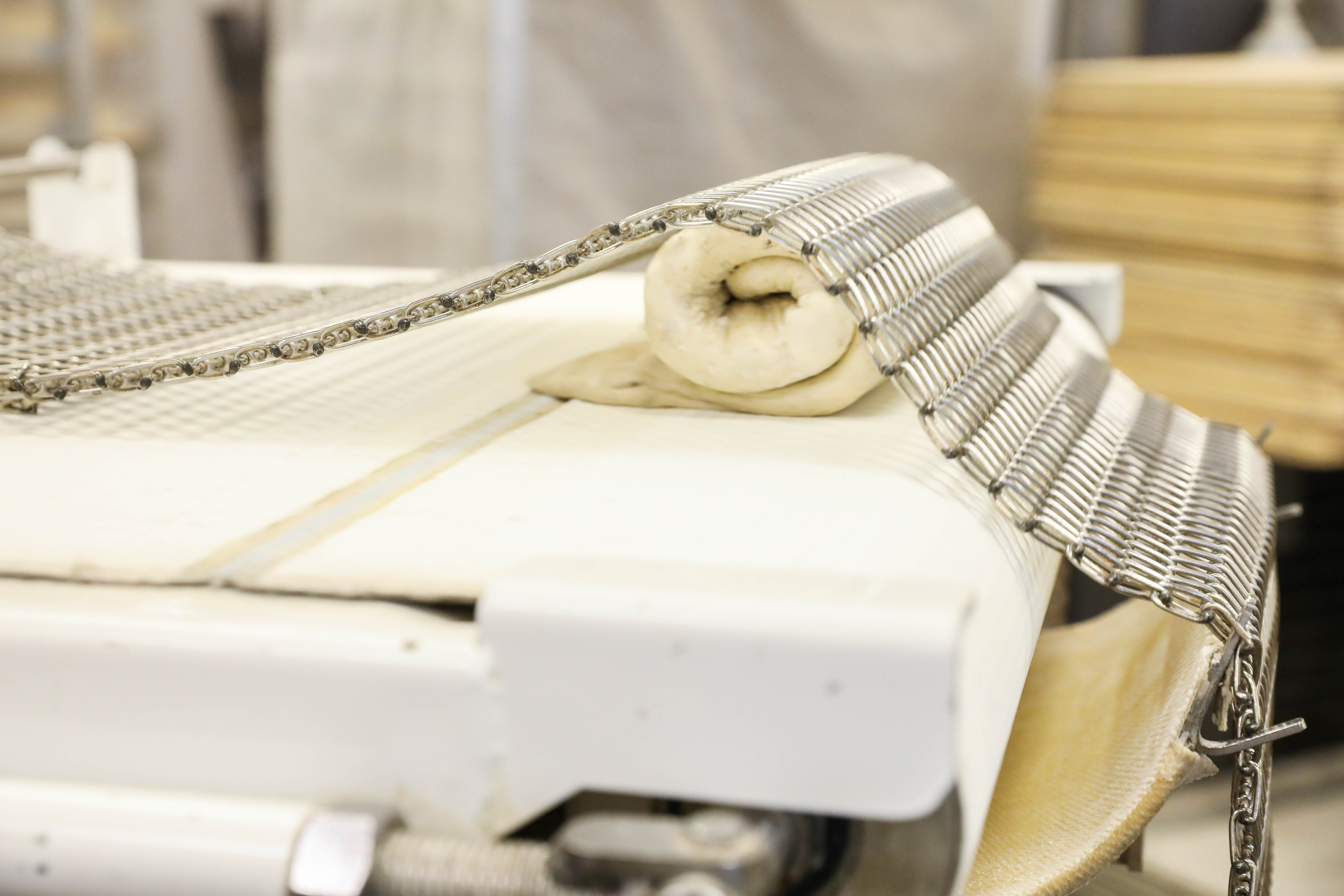 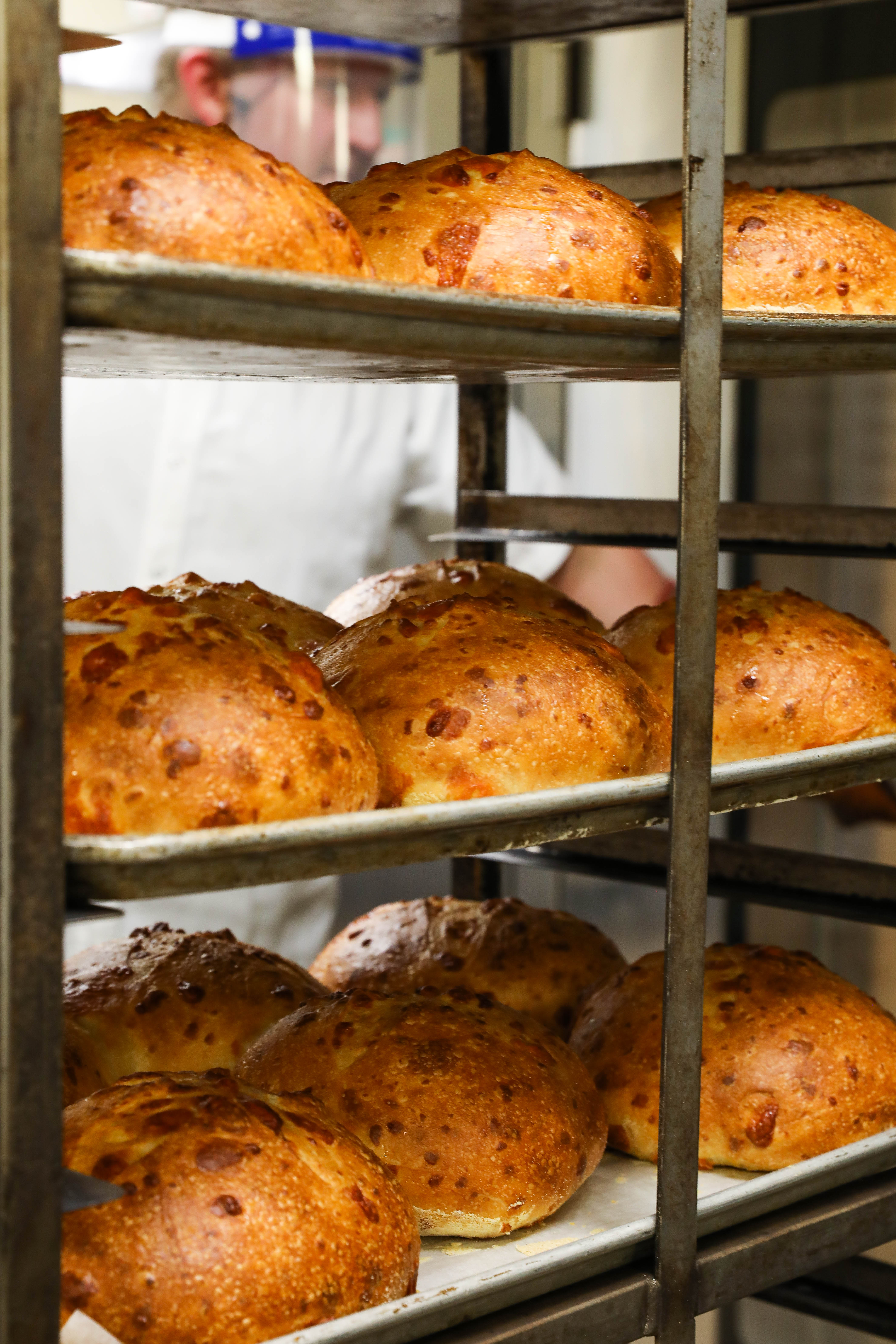 The Farmhouse dough is already looking more puffed up and is ready for its second shaping, where they complete the process once more. You can tell that changes are happening within the dough as Kevin points out that it pops and squeaks more with each movement—more than it did before. “There’s a science to it. Chemical changes are happening that cause flavor,” Jeff says. The rounds are shaped this second time by hand. Meanwhile, the loaves enter a shaping machine before Kevin and Jeff add finishing touches and place them on boards dusted with semolina flour. Everything is then moved to the fermentation room where they’ll sit until the third shift arrives later that evening.

We come back to the Bakehouse, excited to see the dough we’ve observed all day enter the massive German hearth oven to take its final form. The parking lot outside of the Bakehouse is dark once again as nighttime rolls in. Travis graciously comes back to introduce us to our third shift co-workers, and they are all amazing. The atmosphere is relaxed and like most things in the Bakehouse, in rhythm. The Farmhouse was actually pulled out of the proofing box prior to our arrival, around 7:30 p.m. Third shift Bakehouse supervisor Tracey Cochran notes how the proofing box essentially has all of the right conditions to awaken the yeast in the dough (did we mention that the smell is amazing). Tracey and Travis gently place the plump loaves onto the giant belt leading into our hearth oven.

Using a straight blade, scoring marks that both serve a purpose of beauty and function are added to each loaf. These cuts aren’t just decorative, but they are a tool to help the bakers control the expansion of the bread as the yeast becomes most active before it enters the oven. The upper decks of the oven are loaded. 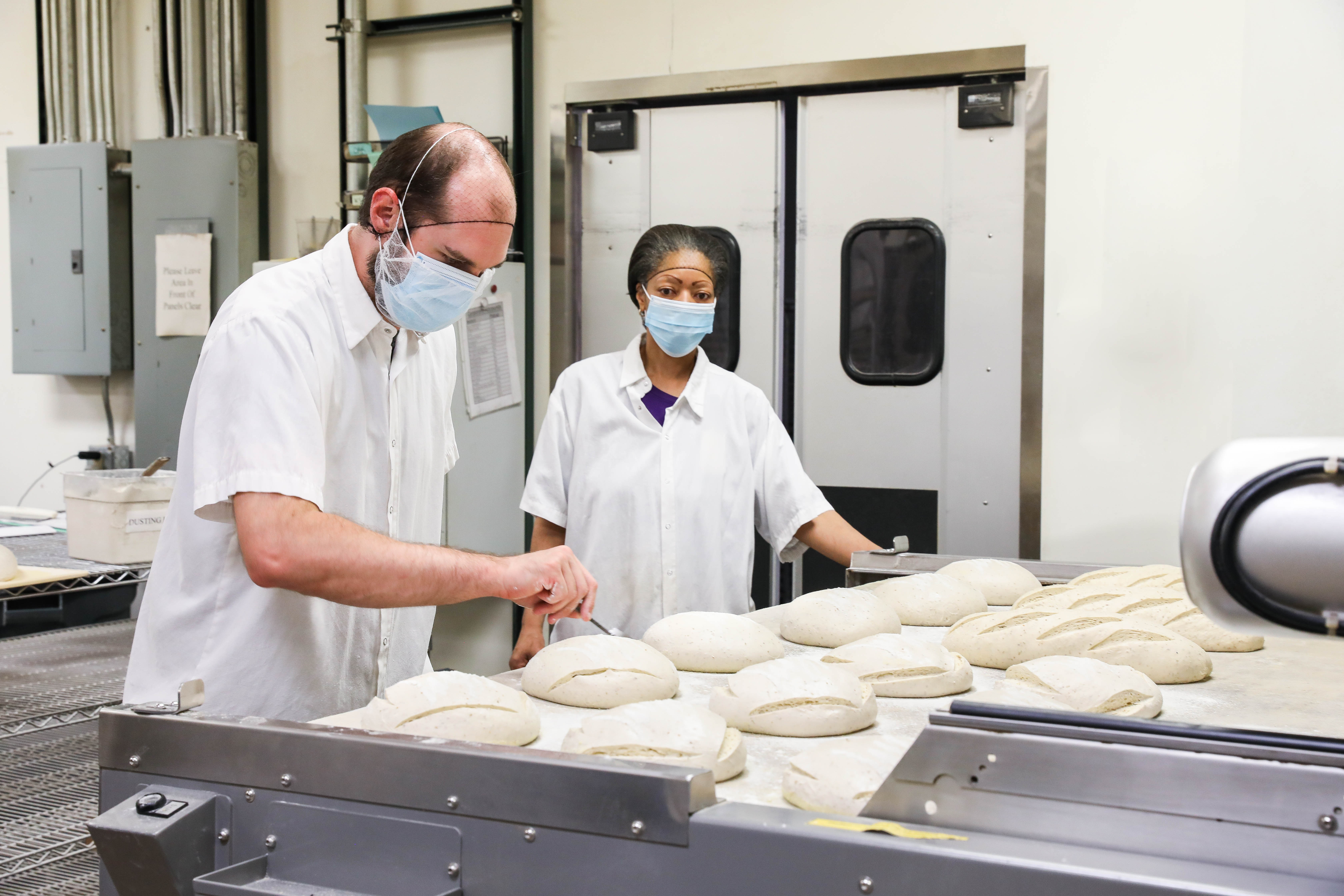 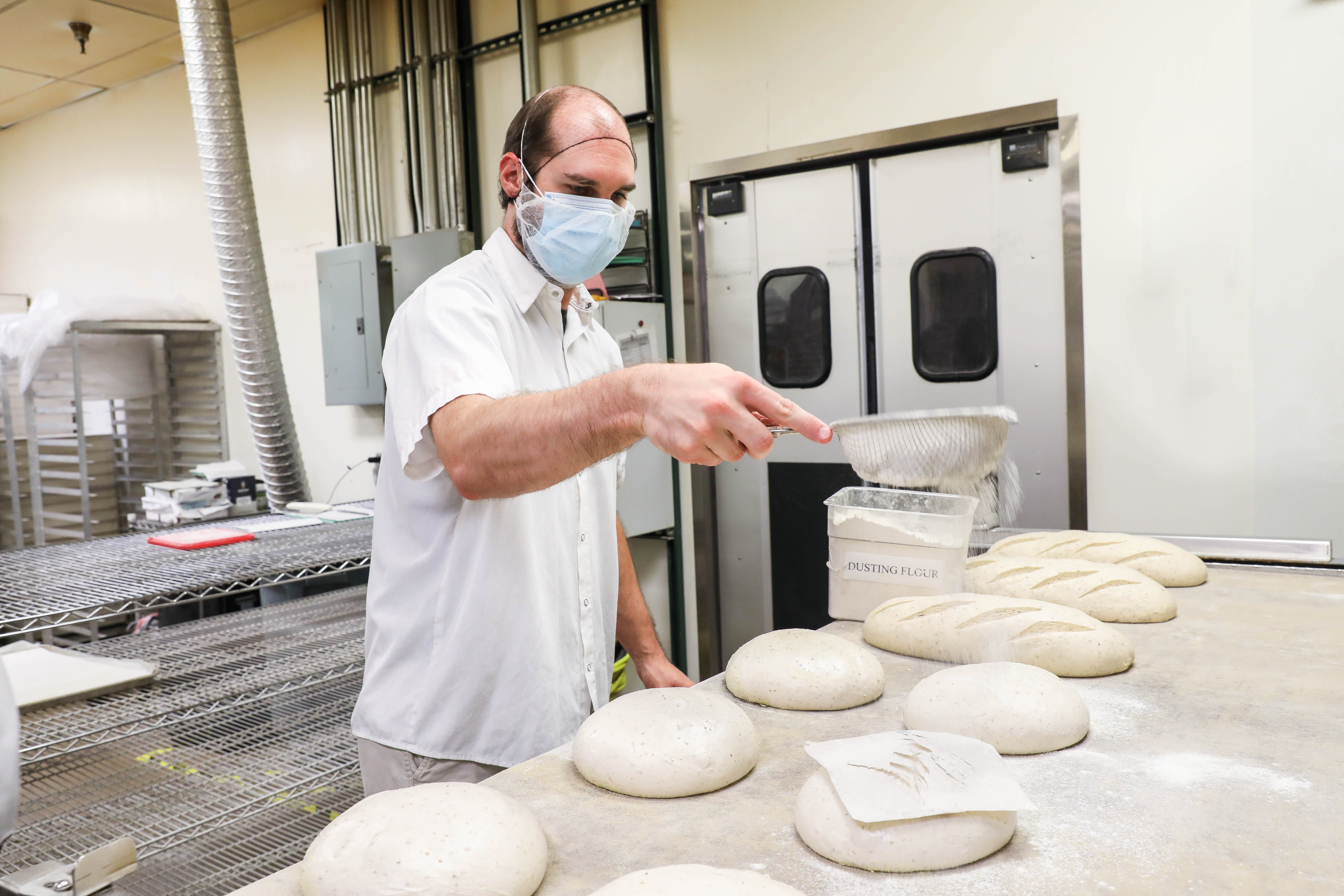 The DLM Signature Rounds (a round version of our Farmhouse) are stenciled with the DLM logo using dusting flour. They are then scored and enter the lower oven decks.

Travis opens oven deck No. 4 slightly to take a peek. The crust is well formed, but not quite browned as much as we’d like,
so he decides to give it a few more minutes. “The timer is just the guideline,” he says as he closes it back up.

Deck No. 4 is ready and Travis exclaims proudly that “this is as close to what I would consider perfect … just the right amount of reddish golden brown, which is the result of the caramelization of simple sugars from the breakdown of starches.”
Travis and Tracey unload the oven belt, dividing up the batch between the three stores. This baking process continues through the entire night.

It’s Friday morning and what was just baked is ready to be taken to each store. For DLM Washington Square, this is the short commute across the parking lot. For DLM Springboro and Oakwood, our DLM truck drivers make sure the fresh bread arrives promptly so each Bakery can beautifully set the case for when doors open. Bon appétit! 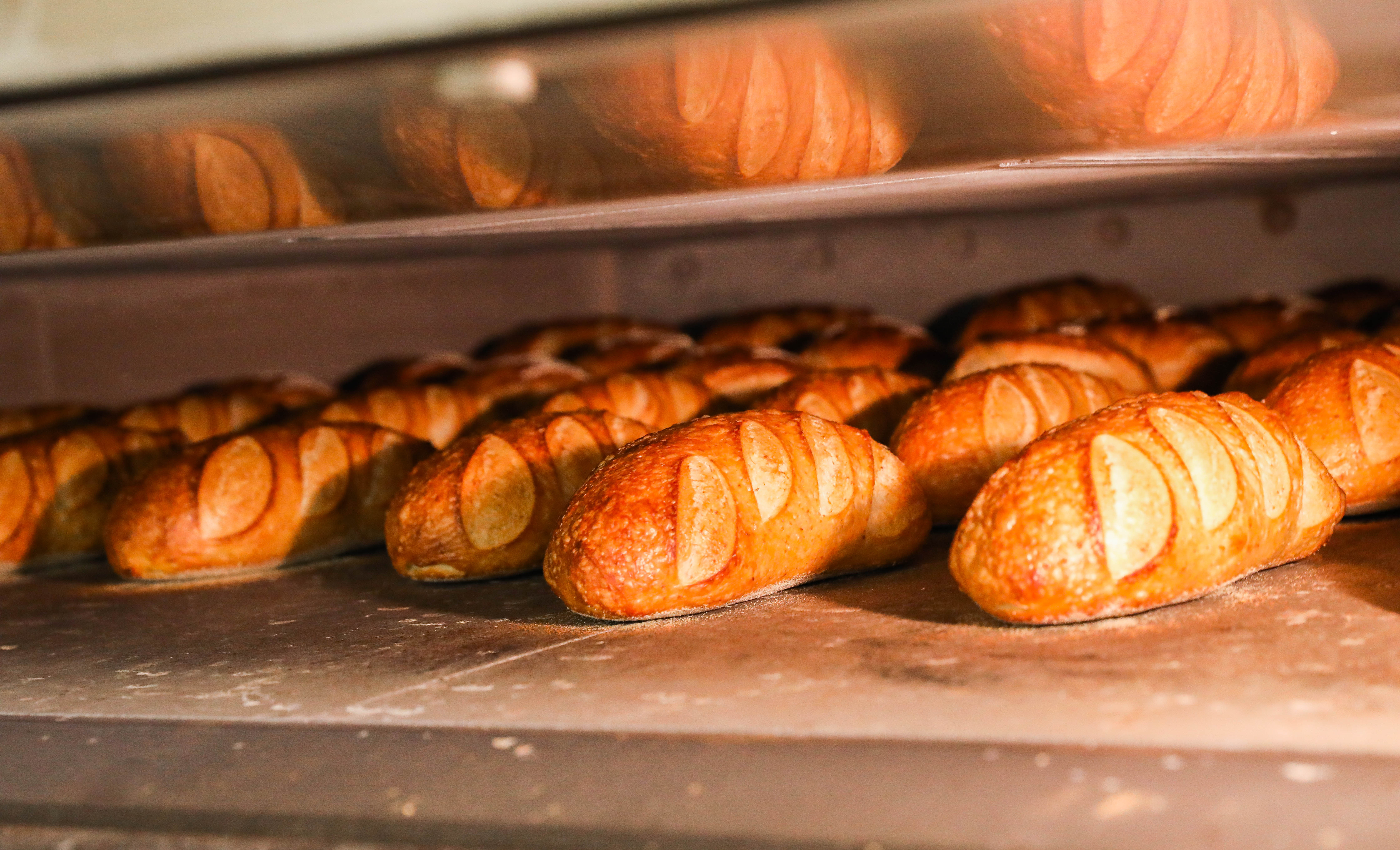 The Art in Artisan Bread

There is so much beauty in the simple act of breaking bread at the table with those you love. When you see each step of the arduous journey that the bread makes from simple ingredients to its final form, it’s a marriage of precision, technique, and artistry all done by our wonderful Bakehouse. As you examine the finished bread, there may be slight variations, such as brownness of the crust. “Nothing’s perfect,” marvels Tracey Cochran, who sees the finished loaves roll out of the oven on the third shift. “And that’s why it’s an artisan loaf … each bread has [slightly] different characteristics to it.”

Savor these popular Artisan Breads and more at the DLM Bakery or have them shipped! 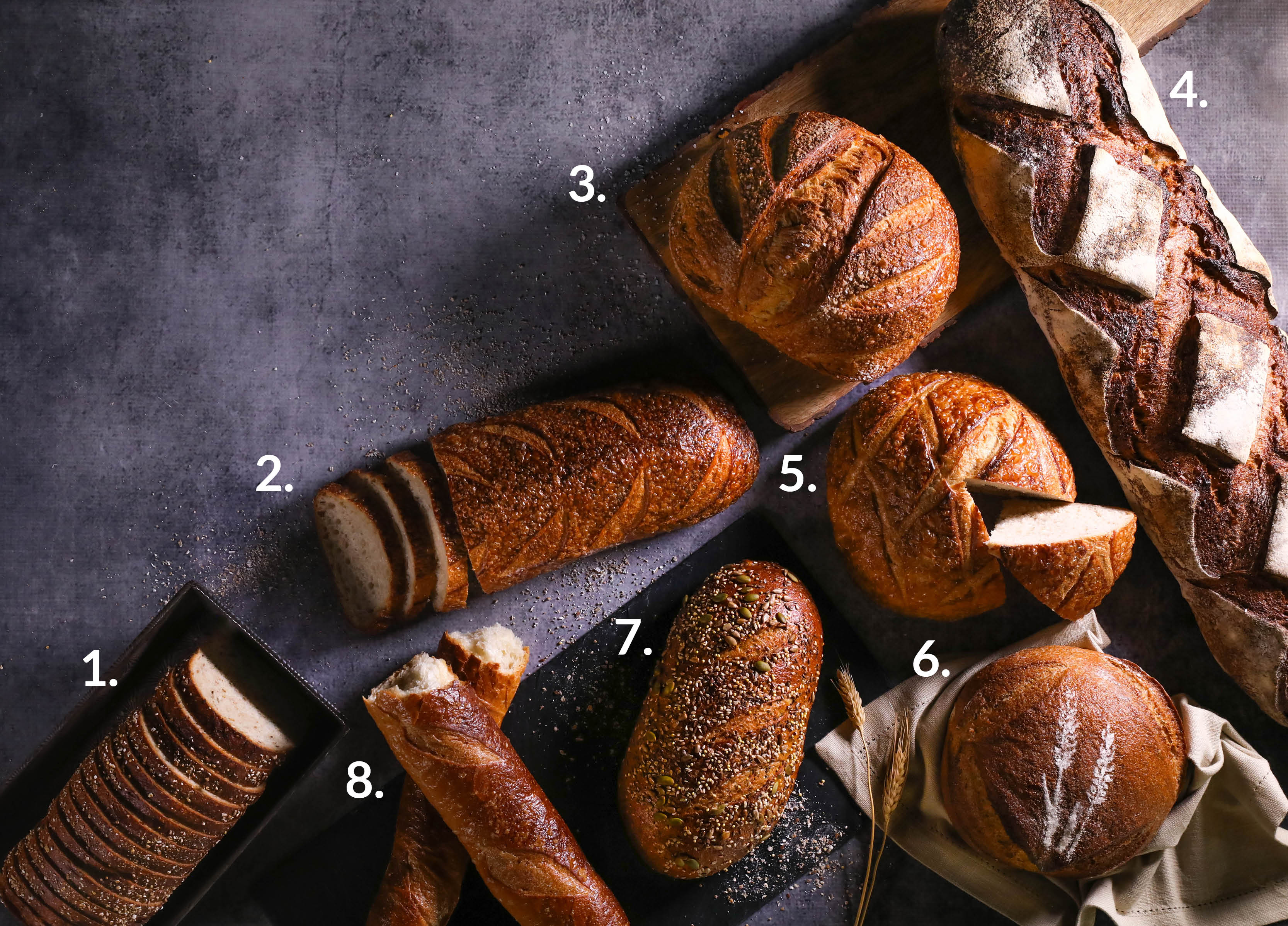 2. FARMHOUSE BREAD
We use all-natural, slow fermentation to make this bread, giving it a lingering flavor and a slight sourdough tang.

3. SALT RYE BREAD
Our bakers artfully shape our New York Rye dough into a boule and sprinkle with Kosher salt before baking.

4. MICHE BREAD
After tasting this type of bread on a bakery lined street in Paris, we knew we needed to make this French-style sourdough with a touch of rye at DLM.

5. SOURDOUGH BREAD
We craft this dough starting with our own “mother” culture, adding flour, sea salt, and water to create sourdough perfection.

6. TURKEY RED WHEAT BREAD
Golden, locally grown wheat is milled farm side to produce this bread’s slightly sweet and nutty flour. This bread is rich in history and flavor.

7. SEEDSATIONAL 100% WHOLE GRAIN BREAD
This artisan bread is chock-full of a variety of seeds, including flax, millet, poppy, sesame, sunflower, and pumpkin.

8. FRENCH BAGUETTE
Using a classic French recipe, we hearth bake our baguettes every day from scratch giving them a crispy, chewy crust and airy interior.

I love watching Jeff and Kevin shaping the loaves. Freshly braided challah is a thing of beauty. Seedsational is so nutty and substantial. The Asiago bread really elevates poached eggs on toast.

Number one is our go-to daily choice: we travel from another area and keep a "par" stock; please keep up the fine work, thanks. Would I need to call one of the stores to find Italian Sesame Bread?

We are glad that you enjoy our artisan breads. The Bake Shop only makes the Italian Sesame Bread on Tuesday through Saturday and it is best to call ahead and order it to be guaranteed that you will have a loaf when you come shopping.